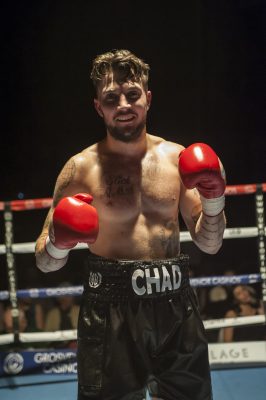 Sugden Moving Upwards and Onwards
Chad Sugden insists he’ll set the pace for his rivals in the light heavyweight division as he continues to make the move from super middle.
Sugden is planning to campaign at 178lbs and will transition to the weight with ring action at Walsall Football Club on Saturday December 22.
He’s a part of the Christmas dinner show in the Stadium Suite at the Banks’s Stadium, staged by BCB Promotions. The bill is called ‘Jingle Brawls.’
‘2 Slick’ will not be coming up from super middle, though, rather down from cruiser where he scored a win last time out after nearly a year out.
The 24-year-old returned to batter Jevgenijs Andrejevs for four rounds in October, but the Latvian hard-man used his guile to see the final bell.
Sugden now prepares for his 10th pro contest with eight wins, three stoppages and just one defeat, a points reverse against Alistair Warren.
That 2016 setback, where Warren pipped him to the post by a point after a six-round battle, has been answered by four wins and two TKOs.
The quartet of victories, with one inside the distance, that preceded the Warren loss leaves his pro record well in the black going forward.
Sugden said : “It was close, I wasn’t expected to lose but it happened and I’ve moved on. I’m all about proving that I’ve come back better than ever.
“It’s a shame the rematch never happened, we had it lined up for the following February but he pulled out. I didn’t get the chance to make it right.
“Boxers are not robots, we have feelings like everyone else and it hurts to lose. It’s brought me on as a person, though, and built up my character.
“I had a break from boxing, which gave me the chance to rest up a bit and I felt that I needed that. My hands were sore, just from wear and tear.
“I started kickboxing from the age of seven and took up boxing when I was 11, so I’ve been fighting for most of my life already and I’m only 24.
“I concentrated on my job for a while, building up clients as a personal trainer, and I’m in a position where I’m settled enough to box regularly.
“I’m ready to go out and get the results that would put a few people in their place. I’m still confident in my ability and what I want to achieve.
“I started out at super middleweight when I turned pro, I was at cruiser for my last one because I’d been out for bit but I’m coming down again.
“I’m growing into becoming a light heavy. I’m 6ft 1in, with the speed to handle most of them at that weight, and I know I can handle the power.
“I feel I can do it, without really compromising anything, and I haven’t seen another light heavy as fast as me. The division could be wide open.
“I’ve been sparring with Ricky Summers, he’s a British level fighter at light heavy and that’s where I want to be. It’s all about getting to national level.
“There’s a lot to look forward to, but I’ve got December 22 to concentrate on first. I sell a lot of tickets, so I always bring a good following with me.
“I’ve been born and bred in Newark and I’m the only one doing this from there, so I’ve had good support locally and that’s very important to me.
“I’m always looking to put the pressure on and I know it’s a spectator sport. If the chance comes along to stop my opponent, he’ll be out of there.”
Three reigning champions feature elsewhere on the card with Adam Harper, Lennox Clarke and Connor Parker all engaging in keep-busy affairs.
English super welterweight champion Harper aims to add to his ledger for the first time since claiming the crown, beating Billy Bird after the full 10.
The former Midlands boss and Commonwealth title challenger, from Tewkesbury in Gloucestershire, claimed national glory on September 21.
Halesowen’s Clarke still holds the IBO Continental super middleweight bauble. He’s boxed just once this year, though, and added to his KO ratio.
The heavy hitting 27-year-old recorded a first round wipe-out for a fifth time and remains unbeaten, heading into battle as a pro for the 19th time.
Midlands super lightweight ruler Connor Parker, from Woodville in Derbyshire, saw off Kevin Hooper in style to claim the strap earlier this year.
Parker has already laced on the gloves again, since then, and recorded a six-round points whitewash success over Jamie Quinn on October 20.
West Bromwich’s Tom Stokes will be lacing on the gloves again after a year out and has challenged for area honours himself, at middleweight.
Stokes, 23, is shedding the pounds from his spell on the sidelines, but has indicated he may move down to super welter and join their title chase.
Lightweight prospect Connor Lee Jones, out of Brierley Hill, appears for the third time as a pro with two wins under his belt, both over the distance.
The 22-year-old has downed Liam Richards and Kristian Laight by landslide and is clear to box again, after a licensing issue delayed his trilogy bout.
The Lions Boxing Club graduate has a fine amateur pedigree and won ABA All England honours. He represented England and Team GB as a junior.
Former kickboxer Troi Coleman, of Burntwood, completes the line-up and will be hunting down his third paid victory in the middleweight division.
‘The Hawk’ has been flying in points results over Lewis van Poetsch and Darryl Sharp. Coleman, 23, fights out of the Platinum gym in his hometown.
Tickets are on sale now, priced at £35 standard and £65 ringside, the latter option to include a Christmas buffet. It will be £40 entry on the door on the night.
For more information, call the Walsall FC Box Office on 01922 651 414 The Grosvenor Casino Walsall will sponsor the show and host the weigh in and after-show party (over 18s).