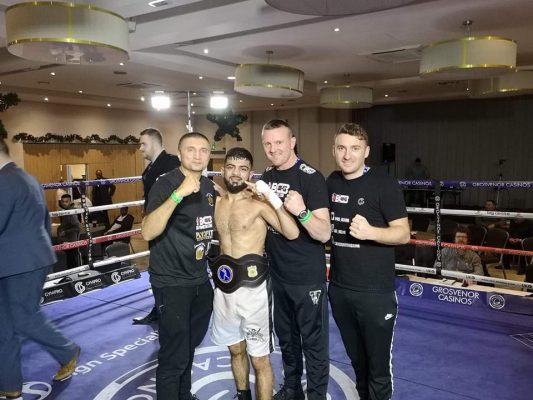 Ahmed Crowned Lord of the Flys

The 25-year-old and Conar Blackshaw produced a small hall cracker for the vacant 8st belt – 10 rounds soaked in the twists and turns of fortune that make for a classic.

They stood toe-to-toe and served a pre-Christmas cracker, a thriller from first bell to last.

Both men were hoisted aloft in victory at the final bell, but it was Ahmed’s more eye-catching shots that earned referee Shaun Messer’s 97-95 decision.

Capturing the belt is an outstanding achievement for “Jazzy”, part of the BCB Promotions stable. He was taking part in only his sixth paid contest (one loss) and had never competed at flyweight before.

Derby’s Blackshaw had the edge in experience with six wins in nine outings and was coming off an unsuccessful bid for the English title. Both men threw punches non-stop in a clash fought at a frantic pace.

There were wins to for Birmingham’s Sean Davis and Telford debutant Liam Davies. Poland’s Damian Kiwior suffered a shock defeat at the fists of Chris Jenkinson in what was the only blot on an almost perfect copybook for BCB, who had saw James Beech Jt crowned Area Champion at super featherweight the night before.