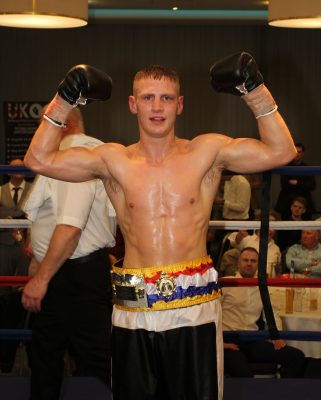 Stokes will see his only action of 2018 when he climbs through the ropes for a four-rounder, at Walsall Football Club on Saturday December 22.

He’s a part of the Christmas dinner show in the Stadium Suite at the Banks’s Stadium, staged by BCB Promotions. The bill is called ‘Jingle Brawls.’

The former Midlands title challenger has sat out all of this year and endured a miserable end to 2017, which saw his first two losses as a pro.

The 23-year-old, from West Bromwich, had previously reeled off nine victories, with one TKO, since turning pro in 2013 while still a teenager.

Him and Tyler Denny, of Rowley Regis, clashed in September 2017 for the vacant area middleweight crown over 10 competitive rounds.

Stokes came up just short on the cards, at the final bell, after it went to points. Referee Kevin Parker had Denny two rounds up, 96-94.

An eight-round contest with Nicky Jenman, on December 21, was a chance to rebound but ended up damaging him in more ways than one.

Stokes went gung ho looking for the finish, after a positive first round, and instead walked onto a right hand, priming him for the finish.

Jenman put his fists together to finish Stokes off with a booming left hook, bringing an abrupt end to proceedings in less than two rounds.

A year and a day later, Stokes hits the comeback trail after shedding the pounds and may even drop down a weight to freshen his career up.

He said: “I’ve had lots of other things going on in my life. I became a father, for the first time, and me and my little family have moved in together.

“I needed some time off from boxing, mentally as well as physically, and I put on a fair bit of weight when I was off. I got to over 14st at one point.

“I’m back training hard now and the more time I spend in the gym, the faster it’s coming off. I’m even thinking about coming down to super welter.

“I turned pro young, I was only 18 and started as a welter. I just got bigger with age and got to middleweight, where I went for the Midlands title.

“I feel I didn’t perform to my best against Denny. It was the right result, I can’t argue with that, but it might have been different had I turned up.

“I underestimated Jenman, I hurt him in the first round and thought it was going to be an easy night. I switched off in the second and paid the price.

“I felt ill in the changing rooms afterwards and the light was hurting my eyes. The doctor thought I had a detached retina, which is a serious injury.

“Whatever it was, it’s healed itself naturally and I’ve had the all-clear to fight again. I’ve done my medicals and I’m good to go for another year.

“I’ve got the spark back and I want something to show from this year, as a boxer, and then I can go for a big 2019. December 22 is my chance.

“I’d still love to become a Midlands champion, either at middleweight or super welter. I know I’ve got to build myself back up, but I can get there.”

English super welterweight champion Harper aims to add to his ledger for the first time since claiming the crown.

Halesowen’s Clarke still holds the IBO Continental super middleweight bauble. He’s boxed just once this year, though, and added to his KO ratio.

The heavy hitting 27-year-old recorded a first round wipe-out for a fifth time and remains unbeaten, heading into battle as a pro for the 19th time.

Midlands super lightweight champion Connor Parker, from Woodville in Derbyshire, saw off Kevin Hooper for the strap in a career highlight earlier this year.

Parker has already laced on the gloves again, since then, and recorded a six-round points whitewash success over Jamie Quinn on October 20.

Chad Sugden, from Newark in Nottinghamshire, is set to move into double figures for experience next time out and will be targeting his ninth win.

His one defeat, to Alistair Warren, led to him going heavier. ‘2 Slick’ was at cruiserweight for his last outing and is likely to be a light heavy for this one.

Lightweight prospect Connor Lee Jones, out of Brierley Hill, appears for the third time as a pro with two wins under his belt, both over the distance.

The 22-year-old has downed Liam Richards and Kristian Laight by landslide and is clear to box again, after a licensing issue delayed his trilogy bout.

The Lions Boxing Club graduate has a fine amateur pedigree and won ABA All England honours. He represented England and Team GB as a junior.

Former kickboxer Troi Coleman, of Burntwood, completes the line-up and will be hunting down his third paid victory in the middleweight division.

‘The Hawk’ has been flying in points results over Lewis van Poetsch and Darryl Sharp. Coleman, 23, fights out of the Platinum gym in his hometown.

Tickets are on sale now, priced at £35 standard and £65 ringside, the latter option to include a Christmas buffet. It will be £40 entry on the door on the night.

For more information, call the Walsall FC Box Office on 01922 651 414 The Grosvenor Casino Walsall will sponsor the show and host the weigh in and after-show party (over 18s).