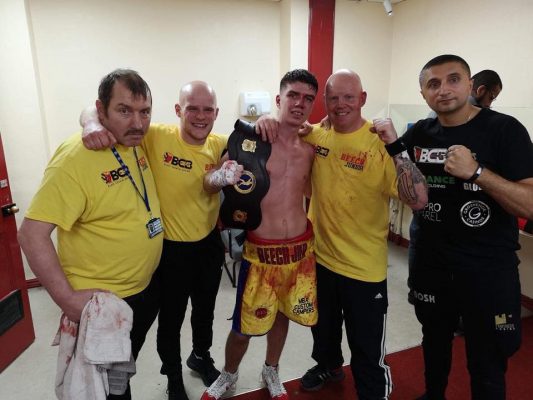 The 21 year old came in to the fight unbeaten and was out of the blocks quickly pushing Fielding, who had previously challenged for the belt on to the back foot. Beech looked very much the 1/4 favourite Grosvenor Casino had him pre fight and racked up the early round’s comfortably, working behind his impressive jab.

A clash of heads in round 4 halted the pace as a nasty cut opened up over Beech’s eye giving Fielding some much needed confidence. Referee Shaun Messer had his work cut out for him as both men landed body shots that were borderline low, with Beech Jnr getting a warning in the 6th.

They continued to trade blows as Fielding looked to target the injured eye but he still wasn’t doing enough to deter Beech Jnr, who was putting together some lovely combinations.

With blood continuing to flow from the cut, the ringside Doctor took a long look and the crowd nervously awaited to see if the bout would be stopped. Despite being way up on the cards Beech Jnr’s sense of urgency increased as he was allowed to continue.

A series of straight right hand’s staggered Fielding and he sank to the canvas with the fight being waived off in the 9th round enthralling the packed crowd in attendance.