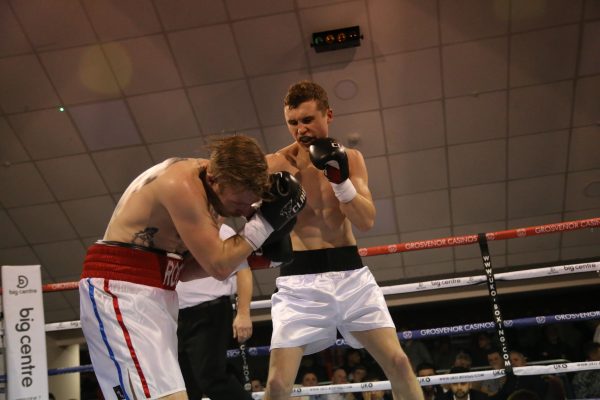 Area Champion Parker Ready To Make It 10-0
Connor Parker is ready to hit double figures and finish a breakthrough year with a bang on Saturday night.
The reigning Midlands super lightweight champion will make it 10-0 as a professional if his hand is raised again this weekend.
The 23-year-old southpaw is scheduled to take on Chris Adaway in a six-rounder at Walsall Football Club, his second keep busy affair since claiming area glory.
He’s a part of the Christmas dinner show in the Stadium Suite at the Banks’s Stadium, staged by BCB Promotions. The bill is called ‘Jingle Brawls.’
Parker, from Woodville in Derbyshire, isn’t taking lightly the trickery of Plymouth’s Adaway, who will be boxing for the 60th time in the pro ranks at the age of just 25.
The area boss is looking to step up to national honours in 2019 and will be keeping a keen eye on the clash for the English crown, between Sam O’Maison and Kay Prospere, in March.
His own finest hour came with a stoppage in July against Kevin Hooper, who retired after five rounds. Former English champion Hooper was TKOd by O’Maison for the belt last April.
Parker returned to action with and recorded a six-round points whitewash success over Jamie Quinn, at King’s Hall in Stoke-on-Trent, on October 20.
The left hander is keen to stay busy and now tackles Adaway over the same distance, with another bout early in the new year the likely next step.
Parker said: “I’m ready to fight, I’m always in the gym and I do enjoy training. I like running, too, so there’s no problem getting me out there!
“It’s important to stay fit, it’s a lot harder to get back in shape than to keep ticking over. I’ll probably have a couple of days off after this and then I’ll be back again.
“There was seven weeks between me winning the title and then getting in the ring again and another nine up to Saturday night. That suits me fine.
“I’d love a crack at the English and I’m waiting in the wings for the opportunity. I’ll probably have another one, either before or around March, and be ready for the winner.
“I just need to keep going, I know Adaway will come to have a go and that’s what I want. I know he’s decent, so I’m not under-estimating him,
“To become the Midlands champion was a big thing for me and now 10-0 sounds like a good way to finish the year. I’d have to be happy with it. That would be nice.
“There’s still work for me to do before I can enjoy my Christmas! I can wait to get in there again, put on a performance and, hopefully, pick up another victory.”
Another reigning champion features elsewhere on the card with Lennox Clarke also engaging in a non-title affair.
Halesowen’s Clarke still holds the IBO Continental super middleweight bauble. He’s boxed just once this year, though, and added to his KO ratio.
The heavy hitting 27-year-old recorded a first round wipe-out for a fifth time and remains unbeaten, heading into battle as a pro for the 19th time.
West Bromwich’s Tom Stokes will be lacing on the gloves again after a year out and has challenged for area honours himself, at middleweight.
Stokes, 23, is shedding the pounds from his spell on the sidelines, but has indicated he may move down to super welter and join their title chase.
Chad Sugden, from Newark in Nottinghamshire, is set to move into double figures for experience next time out and will be targeting his ninth win.
His one defeat, to Alistair Warren, saw him go heavier. ‘2 Slick’ was at cruiserweight for his last outing and is likely to be a light heavy for this one.
Former kickboxer Troi Coleman, of Burntwood, completes the line-up and will be hunting down his third paid victory in the middleweight division.
‘The Hawk’ has been flying in points results over Louis van Poetsch and Darryl Sharp. Coleman, 23, fights out of the Platinum gym in his hometown.
Tickets are still on sale, priced at £35 standard and £65 ringside, the latter option to include a Christmas buffet. It will be £40 entry on the door on the night.
For more information, call the Walsall FC Box Office on 01922 651 414 The Grosvenor Casino Walsall will sponsor the show and host the weigh in and after-show party (over 18s).