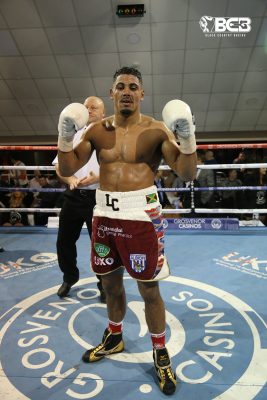 Big Len Is Back!

Lennox Clarke returns to action this weekend determined to climb up the charts after a frustrating period out of the ring.

Eight months on the sidelines will have passed when the still-reigning IBO Continental super middleweight champion next steps through the ropes.

The former unlicensed fighter appeared to be going places, after picking up the IBO bauble last December, and now fights a year on at Walsall Football Club this Saturday night.

The unbeaten 27-year-old laces on the gloves for the 19th time as a pro, with one draw the nearest thing to a blemish. Of his 18 wins, there have been five first round wipe outs.

He’s a part of the Christmas dinner show in the Stadium Suite at the Banks’s Stadium, staged by BCB Promotions. The bill is called ‘Jingle Brawls.’

Clarke, from Halesowen, has been absent through illness, but is now fully fit and determined to pick up where he left off. After tackling the next task in hand, he’s targeting more titles.

A long-standing target is English champion Darryl Williams, with the two on a collision course for the last 18 months.

Williams has had a crack at the British crown, but was outpointed by Clarke’s BCB stable-mate Zach Parker last month.

Former Commonwealth boss David Brophy has also been mentioned, as has Tommy Langford after his move up to 168lbs.

Langford held the British title in the middleweight division and lost two memorable battles with Jason Welborn, who went on to challenge for world honours.

Clarke has his heart set on making waves with a big showdown, something akin to the victory over the experienced Jahmaine Smyle for the IBO strap.

He said: “It’s been a bad year for me. Obviously, my health comes first and I’m just glad to be fit and well again. Now I can concentrate on my boxing.

“I thought I’d got the ball rolling, it was a good win for me against Jahmaine and it seemed I’d be moving on quickly. It hasn’t happened, but it still can.

“It’s good to get one in before the end of the year, I still feel sharp so I’m confident you’ll get a decent performance from me. I’m not just looking to warm myself up.

“I’ll be looking to box behind my jab and bust my opponent up. I want it to go the four rounds, I need the ring time, but I won’t be holding back.

“I’ll be ticking over into the new year and, as soon as possible, I want to get right back into the mix. I’m still in the top 10 and there’s two or three names we’ve talked about.

“It’s great that the British title is in our camp now, Zach is a friend and I think he’ll be looking to move on to bigger and better things. When he does that, I’ll be going after that belt.

“Darryl is still the English champion, which me and him should have boxed for ages ago. As far as I’m concerned, I should have already beaten him for it.

“Believe it or not, I’ve got nothing against Darryl. We’ve called each other all sorts of things, but that’s just fighting talk. Ultimately, we should settle who is the better man in the ring.

“I think I beat him, because he doesn’t know what to do if he can’t steamroll through you. He couldn’t do that to a bloke with one arm (Parker was injured early in the bout) last time.

“Brophy is another name I’m interested in. I like him, but he’s ranked above me and it’s something that would get people talking. I’ll fight anyone, so that’s fine by me.

“Langford has come up to super middleweight now and he’ll bring his ranking with him. I know him well, we’ve sparred together a few times. If we can make it worth it, I’m interested.

“Other things could happen. I just want everyone to know that I’m ready and I’m looking to come back with a bang. After this one, I’m taking on all comers.”

Midlands super lightweight boss Connor Parker, from Woodville in Derbyshire, is also in action. He saw off Kevin Hooper in style to claim the strap earlier this year.

Parker has already laced on the gloves again, since then, and recorded a six-round points whitewash success over Jamie Quinn on October 20.

West Bromwich’s Tom Stokes will be lacing on the gloves again after a year out and has challenged for area honours himself, at middleweight.
Stokes, 23, is shedding the pounds from his spell on the sidelines, but has indicated he may move down to super welter and join their title chase.

Chad Sugden, from Newark in Nottinghamshire, is set to move into double figures for experience next time out and will be targeting his ninth win.
His one defeat, to Alistair Warren, saw him go heavier. ‘2 Slick’ was at cruiserweight for his last outing and is likely to be a light heavy for this one.

Former kickboxer Troi Coleman, of Burntwood, completes the line-up and will be hunting down his third paid victory in the middleweight division.
‘The Hawk’ has been flying in points results over Lewis van Poetsch and Darryl Sharp. Coleman, 23, fights out of the Platinum gym in his hometown.

Tickets are on sale now, priced at £35 standard and £65 ringside, the latter option to include a Christmas buffet. It will be £40 entry on the door on the night.

For more information, call the Walsall FC Box Office on 01922 651 414 The Grosvenor Casino Walsall will sponsor the show and host the weigh in and after-show party (over 18s).