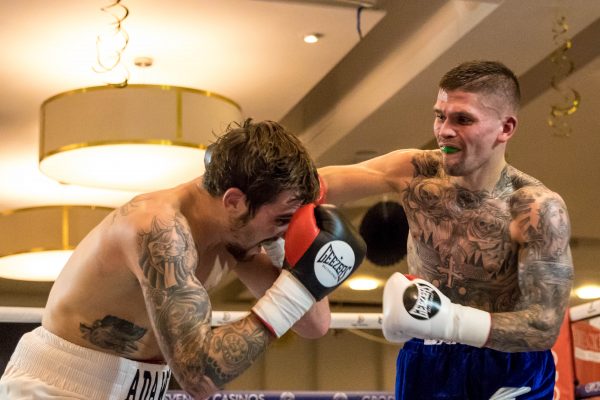 The pair clash for the vacant Midlands Area Lightweight Title at the Holte Suite, Aston Villa FC, on Saturday.

27 year-old Ellis is unbeaten in his opening nine contests as a professional whilst Baker currently has eight win wins, and five losses, on his ledger.

However 28 year-old Baker insists that his losses have been against superior fighters and it is Ellis will be facing his toughest opponent to date this weekend.

“I’ve got five losses on my records but they’re all against a different level of fighter,” explained Baker. “If I’d have stayed fighting the lads he has fought, I could be 13-0 now like he is 9-0.  I’ve stepped up a level and we’re yet to see him do that yet. This is his first real test.

“I watched his last fight against Jamie Speight. I know he’s unbeaten but I see this as a real 50/50 fight. It‘s been said that I’m the easiest opponent he could face for an Area Title with my five losses but he’s my easiest opponent too.

One thing is certain; I’m his toughest fight date but he’s not me toughest.”

‘The Shadow’ will be without coaches Errol Johnson and Paul Mann this weekend with the BCB bosses out in Los Angeles with Jason Welborn, who challenges Jarrett Hurd for the IBF and WBA Super Welterweight Titles.

Baker isn’t fazed though; insisting his only issue is that he’s not able to be out there supporting his stablemate.

“Paul and Errol have trained me throughout the camp but I understand they have to be in Los Angeles with Jason,” he added. “I’m more concerned about the fact I’m not out there with them! I’ve trained with Jason and he’s an inspiration.

“I know Gavin Burrows and Taffy Evans really well and they’ll take me in and look after me in the corner on behalf of BCB. I’m more than happy with that.

“Realistically, this is my best chance to win a ‘proper’ title. And it’s a chance I’m going to grab with both hands.”