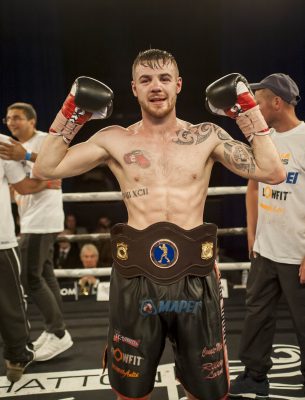 Morris Plotting Title Tilt
Craig Morris is planning to resume his title chase in the welterweight division after he’s returned to action next month.
Morris will be looking to bounce back from his second pro defeat with a comeback win at Walsall Town Hall on Saturday December 8.
He features on Errol Johnson’s BCB Promotions next show at the venue, which is fast becoming the home of Black Country boxing.
The former Midlands champion’s last ring time saw him give the unbeaten Scott Fitzgerald, who is signed to Eddie Hearn’s stewardship, in a televised thriller at Arena Birmingham.
He appeared to have the upper hand until Fitzgerald pulled a 10th and final round stoppage out of the hat, when he looked to be behind on points.
The 26-year-old, from Ludlow in Shropshire, is now likely to campaign again at welter, where he was the area boss until he was outpointed by Ryan Fields last year.
Morris rebounded from that to claim the IBO Continental bauble, after another entertaining over-the-distance belter against Ryan Martin.
Renewing rivalries with Ekow Essuman, the new English champion at the weight, or a pursuit of a Lonsdale belt are among his new year resolutions.
Morris felt hard done to after the setback against Fitzgerald, but feels he’ll begin his redemption at the place where it all began for him as a pro in 2015.
He said: “I’ve watched it back twice since, my corner had me up by a couple of rounds and I’m told the official did, too. The stoppage changed everything.
“It wasn’t the worst result in the world, most people hadn’t given me even half a chance so I wasn’t expected to push him in the way that I did.
“He did catch me, I can’t deny that, but I personally believe I should have been given the benefit of the count. I deserved the chance to recover.
“We didn’t box for a title, in the end, I couldn’t defend my IBO belt because it was at super welter and he came in at 2lb over the limit, anyway.
“I only found it that it wasn’t going to be for a title at the weigh in, I felt a bit done over because I felt the fight, ultimately, wasn’t worth anything.
“There’s been no talk of a rematch and I’d want something good on the line to do it, anyway. I’ve still got the IBO, as well, so I can still fight for that.
“I’m ready for whatever comes up now, I’m going back to welter but if opportunities come up at super welter, I’ll be happy to go up a weight again.
“I’d like to go after more titles at welter and I’ve asked my team to put me forward as a voluntary defence for Johnny Garton, the British champion.
“I watched with interest that Ekow has won the English title and we’ve met before, when we were amateurs and he was on the Team GB squad.
“We sort of had the same coach, because Bob Dillon was one of the trainers at GB and a club coach at Lions (Dudley), who I boxed for at the time.
“It was close between us, he won by majority decision but you can’t really tell anything about a three-round bout. I’ve always been a slow starter.
“I think it would be a different story over 10 rounds. He still hasn’t been that distance, I have and that could be telling if he we were to meet again.
“It’ll be good to get back to Walsall Town Hall on December 8, I made my pro debut there three years ago and I’ve come a long way since then.
“It’s useful for me to get another fight in before the end of the year, get that defeat out of my system and, hopefully, get back to winning ways.”
The main event at the Town Hall will see local favourite James Beech Jr, of Bloxwich, contest the vacant Midlands super featherweight title with Tamworth’s Louis Fielding.
Two six-rounders support the top of the bill, with major domestic challengers Ricky Summers and Tyler Denny returning to action.
Tipton’s Summers challenged for the British light heavyweight crown last year and was last ruled out of a clash with Olympian Joshua Buatsi through injury.
Denny, from Rowley Regis, has recovered from the horrific split lip and heavy swelling by his eye that put paid to his English title aspirations in September.
‘Ruthless’ still reigns supreme as the Midlands middleweight champion and is determined to bounce back from that eighth round retirement to Reece Cartwright.
Lee Glover returns to the ring after two years out. ‘The Tipton Slasher’ has competed for Midlands and English honours, the latter at two weights. He’s back at super feather.
Luke Caci, from Newcastle-under-Lyme and a product of Orme Boxing Club, goes after a magnificent seven of pro boxing wins. The 28-year-old light heavy has six points wins so far.
Wolverhampton’s Conah Walker, a protege of boxing legend Ricky Hatton, targets a hat-trick of paid successes. The Merridale BC graduate only turned over on September 22.
Walsall’s Levi Ferguson and out-of-towners Nathan Reeve and Cole Johnson complete the card at super welterweight, bantam and lightweight respectively.
Tickets, priced at £35 standard or £60 VIP ringside with a buffet and waitress service, are on sale from the Town Hall Box Office on 0845 111 2900. It will be £40 for entry on the door.
The Grosvenor Casino Walsall, on Bentley Mill Way, are the show’s headline sponsors. They will host the weigh in (over 18s).