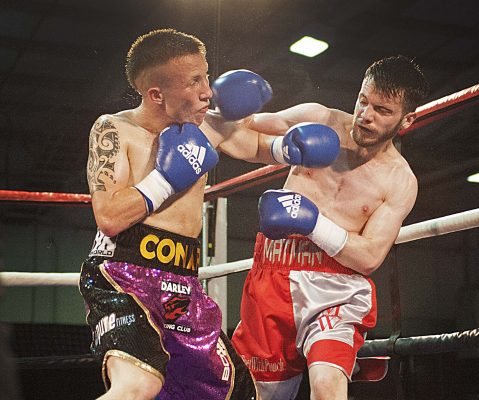 Blackshaw Determined To Be Lord of the Flys
Conar Blackshaw plans to show he’s the true flyweight of the two when he challenges for the Midlands title next month.
Blackshaw could become a bona-fide British Boxing Board of Control recognised champion at the Holiday Inn Queensway in Birmingham, on the Sunday afternoon of December 9.
He’ll give up home advantage to Brummie Ijaz Ahmed, who will drop to 112lbs as he looks to claim his first belt, in the 10-round main event.
The title tussle will headline Errol Johnson’s BCB Promotions dinner show in the second city, on a bill which has been dubbed ‘Lord of the Flys.’
The vacant 112lb area crown has only ever been contested four times, in two contests that became rematches after one was ruled a draw.
Brummie Anthony Hanna was the first champion in 1994, outpointing Shaun Norman. The two also went the distance on the second occasion, a year later, which ended a stalemate.
No new title holder was produced when the strap was contested in 2015, as Jamie Williams and Usman Ahmed could not be parted. Williams won the return, on points, a year later.
Blackshaw holds a victory over Williams in an eight-rounder, a distance he has completed twice as a pro. He challenged for English flyweight honours earlier this year.
The 25-year-old, from Derby, travelled to the Barnsley Metrodome to battle for the vacant belt with Kyle Yousaf, but retired with a hand injury after six rounds.
His 2018 could still end with crowning glory, though, and he’s boxed on the road since early on his pro career. His third paid bout saw him outpoint Adam MacKenzie in Glasgow.
Blackshaw, who is trained by father and son coaching team Mike and Jay Shinfield, believes his game attitude could make all of the difference next time.
He said: “It doesn’t bother me going away from home, I’ve boxed in Scotland on a Thursday night and beat the home guy before, so I know how to stay focused.
“I do get a good following, though, and I’m looking to take a fair few to Birmingham with me. They are a noisy bunch, so I’m sure they’ll be heard.
“This is what we wanted, my team got a call and I was happy to take the fight. It’s a serious title, that could lead on to bigger and better things.
“I’ve always made flyweight well, I can punch a bit at the weight and I can box as well. I’m planning to be far better and much faster than he’ll be.
“I’m a natural fly, he’s coming down in weight and I’ve got the advantage of being more active. I’ve got that added experience of more ring time.
“I don’t think there’s anything he can do that will surprise me, I don’t know a lot about him but I’ve been in with all sorts of opponents before now.
“I always seem to come away having picked something up. If you ever stop learning, it’s probably time to pack up. I think I know enough to beat him.”
Blackshaw feels he was dwarfed in his previous title opportunity against Yousaf, who took full advantage of a day before weigh-in. It was his third defeat as a pro.
He was thwarted in both of his first two contests, losing to Craig Derbyshire and Matt Windle on points. He put together a six-fight winning run afterwards, although a TKO eluded him.
Blackshaw said: “I had a shot at the English, but I was never going to be the favourite against someone so much bigger than me. He looked like a featherweight
“I wondered how he’d make it through the fight, when I saw him at the weigh in. He looked so drained, I don’t know he re-hydrated like he did.
“It really told in there, he could just take everything that I was doing and then push me away. He put it on me, I hurt my hand and it was over.
“It wasn’t really a fair fight and I’ve had that more than once before. I lost to Derbyshire and Windle when they were heavier than me.
“It makes so much difference, at such a low weight, as there can end up being two divisions of difference between us. That should never happen.
“I’ve made mistakes, been beaten and learned from it. You can take more from a good loss than a bad win. You can’t improve without a challenge.”
Central Area heavyweight champion Kash Ali, born in Birmingham but now living in Sheffield, features trying to keep up a run that has seen him score six TKOs from his last eight outings.
Jordan Clayton, who is now looking to campaign at welter, makes the short trip from Solihull having returned to winning ways at the same venue in September.
Super lightweight Brad Thomas, a protege of Frankie Gavin, drew on that September 16 card and will want to go one better this time.
Fellow Brummie Zaheer Asghar completes the line-up. The southpaw is looking to make it a hat-trick of victories in the super middleweight division.
Tickets for ‘Lord of the Flys’ are on sale, at £65 VIP ringside to include a two-course Sunday lunch or £35 standard. For more information and to buy, contact the boxers on Facebook.
Images (c) Mark Jones Photography