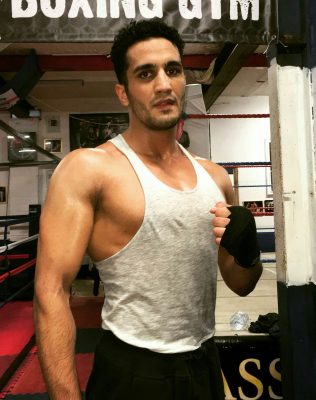 Driving Instructor Ashgar On Fast Track To Success
Zaheer Asghar believes he’s on the fast track to success as he juggles being a driving instructor and professional boxer.
Asghar continues his journey as a paid pugilist at the Holiday Inn Queensway in Birmingham, on the Sunday afternoon of December 9.
He features on Errol Johnson’s BCB Promotions dinner show in the second city, on a bill which has been dubbed ‘Lord of the Flys.’
The vacant Midlands flyweight crown will be on the line in the main event, where Ijaz Ahmed tackles former English title challenger Conar Blackshaw, from Derby.
Ahmed’s fellow Brummie Asghar sees his third pro bout as a vehicle for adding to his ledger, which contains two points victories since turning over.
He represented the Birmingham City, Hall Green and Eastside boxing clubs, as an amateur, clocking up a record of 49 wins from 58 contests.
The 29-year-old southpaw, from Sparkenhill, first punched for pay in February 2016, outpointing Baltazaras Bajournas before a two-year hiatus from in-ring combat.
He returned in February to beat Lewis van Poetsch over the distance, with both outings in the Holte Suite at Aston Villa Football Club.
Both were scored 40-35, taking into account Asghar dropping his opponent with a right hook to the body along the way. He’s packed a punch as a pro so far.
Asghar combines sporting ambitions with an influx of students at the Result Driving School in Birmingham. He insists he’ll teach his next adversary a boxing lesson on December 9.
He said: “I have my busy days, I’m on the road a lot and then I’ve got my training to think about as well. It seems to be working, I’m feeling fitter than ever!
“I wish I’d have turned pro years ago, I never really took being an amateur seriously and, at one point, I was ranked No 10 at my weight in the UK.
“I wasn’t preparing or eating right and I didn’t have the discipline that I do now, even though I’ve had good results and done well in tournaments.
“I nearly boxed Chris Eubank Jr once, I took it and then he pulled out. I ended up beating an Irishman, Craig McCarthy (now also a pro). on points instead.
“I remember Nigel Benn shaking my hand afterwards and telling me how well he thought I did, which gave a buzz. I know I’ve got the ability.
“I’ve had two wins as a pro and I’m pleased with how I did. I had a Lithuanian lad for my debut, I dropped him with a body shot in the third.
“Poochi is a lovely guy and very durable. I hurt my left hand on him, he was that tough, but I managed to put him down as well.
“Both went to points, but the win is all that’s important. Everything else is a bonus and I got the rounds in, along with showing a bit of power.
“Journeyman are good at surviving and are really hard to open up. When I come up against live opponents, you’ll really see me at my best.
“I’m normally a middleweight and that’s where I can see myself going for titles. It’s where I’m supposed to be, super middles are a bit too big for me.
“If I can stay focussed, I think I’ve got a good five or six years of boxing left in me. It’s a pipe dream, at the moment, but my aim is the British title.”
Three other contests complete the line-up at the Holiday Inn Queensway, including a keep-busy affair for Central Area heavyweight champion Kash Ali.
The area boss, born in Birmingham but now living in Sheffield, features trying to keep up a run that has seen him score six TKOs from his last eight outings.
Jordan Clayton, who is now looking to campaign at welter, makes the short trip from Solihull having returned to winning ways at the same venue in September.
Super lightweight Brad Thomas, a protege of Frankie Gavin, drew on that bill and will want to go one better this time. He completes the line-up.
Tickets for ‘Lord of the Flys’ are on sale, at £65 VIP ringside to include a two-course Sunday lunch or £35 standard. For more information and to buy, contact the boxers on Facebook.