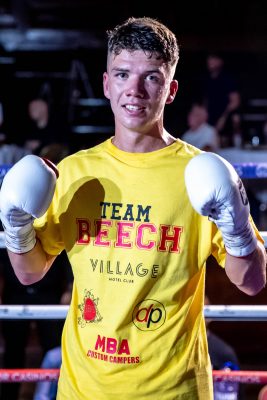 James Beech Jr admits travelling up to super featherweight might be for ‘one time only’ as he prepares to challenge for the Midlands title in a huge hometown fight.
He and former title challenger Louis Fielding will do battle for the vacant area crown at Walsall Town Hall on Saturday December 8.
The two headline Errol Johnson’s BCB Promotions show at the venue, which is a short distance from Beech’s roots in Bloxwich.
The 21-year-old will put on pounds to take his opportunity, after intending to campaign at super bantam. He’s only weighed in at over 130lbs once – his last outing – as a pro so far.
Beech is unbeaten after eight paid bouts, with one TKO to his credit, and now puts his ‘0’ on the line against an opponent who has no such worries.
Tamworth’s Fielding, 28, has eight wins himself but also five losses, including a sixth round stoppage to Paul Holt with the same honours on the line in 2016.
Beech will give up height and natural size to his co-challenger, but feels he can still slay his foe and get his hands on the British Boxing Board of Control endorsed strap.
Family pride will be something else on the line for the second-generation fighter. He’s the son of Jimmy Beech, who featured 31 times as a pro at lightweight between 1999 and 2008.
He’s a graduate of Pleck Boxing Club, who he boxed for 80 times with 50 wins. This year has marked a decade since he first competed as an amateur.
Another James Beech Jr arrived recently with the birth of Beech Jr’s first child – James Beech Junior Junior!
He said: “The little one is here now and I;m so proud of him, and my partner Italia,” Beech Jr said of Beech Jr Jr. I’m ready for it all.
“I’ve been wanting something big to happen and this is a whole new level. When I reach that, I want to stay there.
“I’ve been boxing for 10 years now and to have this first 10-round contest to see out 2018 is something I’m buzzing about.
“To be in the main event with all of my friends, family and supporters there at the Town Hall puts a bit pressure of me, but I’m sure I’ll rise to the occasion.
“We tried to get Fielding at feather, but he didn’t think he could make the weight and I can understand that, because he’s a big super feather.
“Both belts are vacant, so it’s no major issue, and I’ll still be looking to get as fit as possible. I’ve not boxed at super feather much, but I think I’ll still be strong.
“I had a feeling more opportunities would come at feather and above, because I’m too big for a lot of super bantams. I keep tabs on everything, though, so we’ll see what happens.
“I’m not worried about moving up, but this could be for one time only. It would be great to win the belt, but I’d probably vacate and move back down.
“I’m prepared to do that, as long as I can get something similar or higher. I could try and become a two-weight Midlands champion, or go straight for a major domestic title.
“This is about opening doors and then pushing on for bigger things. I’d only be looking to defend the Midlands to stay busy or it was an eliminator for something else.
“Fielding got the call for this because you know what you’re going to get from him – he’s always in the gym and ready to go. He’ll be coming to win, too.
“I’ll cope with whatever Fielding throws at me, he’s a tall lad and he tries to box but he’s not slick. He’s there to be hit. Hopefully, I can put it on him.
“It’s all about getting the victory, by any means possible, but I’m looking to do it in style. I’m more than confident I can get the job done on December 8.”
Two six-rounders support the next top of the bill at the Town Hall, with major domestic title challengers Ricky Summers and Tyler Denny returning to action.
Tipton’s Summers challenged for the British light heavyweight crown last year and was last ruled out of a clash with Olympian Joshua Buatsi through injury.
Denny, from Rowley Regis, has recovered from the horrific split lip and heavy swelling by his eye that put paid to his English title aspirations in September.
‘Ruthless’ still reigns supreme as the Midlands middleweight champion and is determined to bounce back from that eighth round retirement to Reece Cartwright.
Another man with a point to prove will be Craig Morris, from Ludlow in Shropshire, who is looking to rebound from his own September setback.
Morris lost his undefeated status in a televised thriller at welter with Scott Fitzgerald, who pulled a 10th and final round stoppage out of the hat when he looked behind on points.
Lee Glover returns to the ring after two years out. ‘The Tipton Slasher’ has competed for Midlands and English honours, the latter at two weights. He’s back at super feather.
Luke Caci, from Newcastle-under-Lyme and a product of Orme Boxing Club, goes after a magnificent seven of pro boxing wins. The 28-year-old light heavy has six points wins so far.
Wolverhampton’s Conah Walker, a protege of boxing legend Ricky Hatton, targets a hat-trick of paid successes. The Merridale BC graduate only turned over on September 22.
Walsall’s Levi Ferguson and out-of-towners Nathan Reeve and Cole Johnson complete the card at super welterweight, bantam and lightweight respectively.
Tickets, priced at £35 standard or £60 VIP ringside with a buffet and waitress service, are on sale from the Town Hall Box Office on 0845 111 2900. It will be £40 for entry on the door.
The Grosvenor Casino Walsall, on Bentley Mill Way, are the shows headline sponsors. They will host the weigh in.