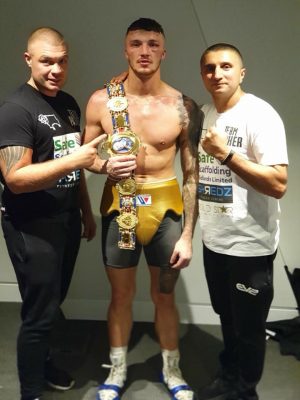 The Swadlincote pugilist took his unbeaten record to 17-0 and claimed opponent Darryl Williams’ ‘0’ in the process.

The 24 year-old started brightly but disaster struck early in the third round as Parker dislocated his left shoulder, meaning he had to box the remainder of the contest with one arm. With Parker hampered, Williams enjoyed success in the middle rounds before a rousing three round finish from the Derbyshire fighter. Parker somehow managed to bite down on his gumshield and work through the pain barrier to outbox and outwork Williams in those latter rounds to snatch victory from the jaws of defeat with a performance that oozed both skill and determination.

“We are delighted for Zach,” explained BCB’s Head of Boxing, Errol Johnson. “He showed a tremendous amount of heart to just get through the fight and a tremendous amount of quality to get the decision. His footwork and head movement, with a dislocated shoulder, was world class. Those final three rounds, when we feared Williams would really put it on him; Zach boxed and moved and showed his class.The judges carded a split decision 117-112 and 115-114 in favour of Parker. A third had it 115-113 to Williams.

“A lot has been made of the decision and I don’t think enough credit has been given to Zach. It was a close fight and we were delighted to get the win and claim the British Title. Imagine boxing with one hand, and battling through the pain of a dislocated shoulder for the best part of ten rounds? And winning a British Title against an unbeaten fighter? That tells you what Zach is all about.”