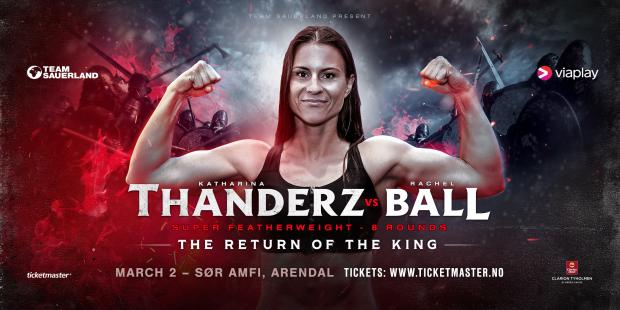 Ball Travels To Norway To Take On Undefeated Thanderz

Aldridge’s Ball (4-0) put her undefeated record on the line over eight rounds at the SØR Amfi in Arendal on Saturday, 2nd March.

Thanderz was scheduled to defend her European Super Featherweight title against Elhem Mekhaled in December but suffered a herniated cervical disc in sparring, forcing her to withdraw from the contest and vacate her title.

“It’s a big step up for me but it’s the kind of fight I want and need,” Ball told bcb-promotions.com. “Katharina is an excellent fighter who has competed at the highest level and that’s what I want to test myself against.

“She’s coming back from injury so this may be the perfect time for me to catch her and take away that unbeaten record. This is my time to shine.”

Thanderz has now fully recovered from injury and, whilst respectful of Ball, is confident of kick-starting her career with victory.

“I think Rachel Ball seems like a tough fighter, and I am sure she will come well prepared to face me,” she explained to sauerlandpromotions.com. “She is also unbeaten at the moment, so I expect she will be hungry for victory. Nevertheless, I will be more prepared than ever, and I’m looking forward to ending the fight with 11-0 as my new record.

“I’m really looking forward to fighting in Arendal on March 2. It has been several months since I was last in the ring, and I feel a huge motivation to be back again. The fact that I will be boxing in the country I was born makes it even more exciting,” says Thanderz, who currently resides Alicante, Spain.

“I was injured during a sparring session when preparing to defend my EBU title, and it was quite complicated for a while. I had to stop training completely and I was unable to spar, but I’m completely healed now. I started sparring again two weeks ago, and I feel absolutely great.

“I will be training in Spain for this fight, doing my boxing training at the Vista Gym in La Nucia with my boxing coach Jesus Labradador, and my physical exercises with Christian Marcet at Odin Athletes. We plan on bringing over two sparring partners to ensure I am one hundred percent ready for the fight. One of them is Nina Bradley from the UK, who I have trained with before.”

The fight is chief support to Kai Robin Havnaa’s cruiserweight showdown with Rad ‘Thunder’ Rashi. The card also features Hadi Srour against Zoltan Szabo in a six-round super lightweight contest and middleweight Anders Eggan against Frane Radnic over six-rounds. Tickets are available via http://www.ticketmaster.no or by calling (+47) 22 82 81 97.