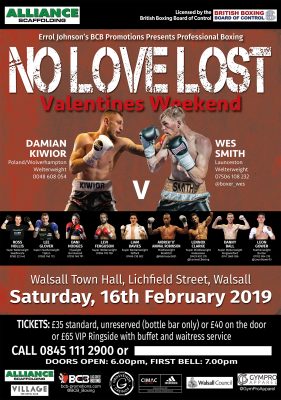 BCB Promotions are back at Walsall Town Hall over the Valentines Day Weekend.

Kiwior has a point to prove after he was handed his first pro defeat last December, when he was nudged out by a round in a points loss to Chris Jenkinson whereas Smith will be looking to protect his ‘0’.

A stacked under-card will precede the main event, with the nine occupying the home corner a mix of prospects and contenders.

The experienced Andrew Robinson, from Redditch, will feature. ‘D’Animal, 34, is a former Midlands and IBO Continental middleweight champion.

Halesowen’s Lennox Clarke is still ranked in Britain’s super middleweight top 10. The undefeated hopeful steps into a pro ring for the 20th time, with 19 victories and no defeats.

Leon Gower, of Burton, returns after an unsuccessful attempt at the Midlands super bantamweight title, going down to Brad Foster in a thriller last year. Foster is now in line for a crack at the British crown, where Gower is looking to rebuild a path towards starting by registering his seventh success as a pro

Tipton’s Lee Glover has voiced that he’s plotting a path towards glory at 118lbs, having previously challenged for Midlands and English honours. He’s also back in action.

Danny Ball, from Kingswinford, laces on the gloves again and is from pugilist stock with older brother Jamie a one-time holder of the Midlands strip in the same division of super welter.Ball will have eyes on emulating those achievements in the not too distant future.

Prodigy Liam Davies, 22 and from Telford in Shropshire, boxes for the second time as a pro, looking to build another reputation after representing his country regularly in the amateurs.

Female flyweight hopeful Dani Hodges, boxing out of Burntwood, steps into combat again chasing a hat-trick of paid victories since obtaining a British Boxing Board of Control license.

Super welterweight Ross Hollis, from Swadlincote in Derbyshire, equally aims for a trio of wins since first punching for pay.