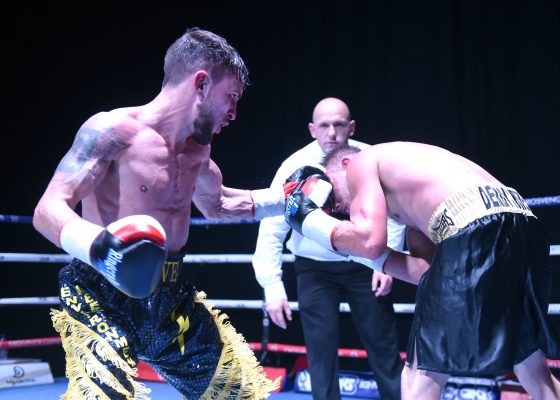 Thunder Hoping To Storm Into 2019
Nathan ‘Thunder’ Reeve is hoping to storm into 2019 with an unbeaten end to 2018 writes Ben Gibson.
The Northampton fighter is set to fight at Walsall Town Hall on the 8th December and will hope to take his record to 12 and 2.
The 28-year-old bantamweight last fought on the 20th May against Khvicha Gigolashvili and won on points after six exhilarating rounds.
“I am excited for the fight,” he said. “Initially I was preparing for a fight in October/November, which unfortunately did not go ahead so I am feeling more than ready for this one.
“I have had to be sensible with my training because of this to make sure I peak at the right time, but everything so far is on track.
“I am performing great in the gym and mentally I am raring to go.”
With the extended camp it has meant that ‘Thunder’ has been in camp for a longer period and has taken advantage of the extended camp by sparring fellow Northmapton-born boxer and current Super Bantamweight Commonwealth King, Ash ‘The Flash’ Lane, admitting it was quite the collision when Thunder met Flash.
“I travelled down to Bristol last weekend for sparring with my old club mate Ashley Lane,” he confirmed. “We ended up doing 12 rounds at a cracking pace, so I can’t get much better preparation than that!
“We know each other like the back of our hands, and it is always tough sparring.
“It is because we both go at it and it is because we know each other’s styles well and we are both forward fighters so it is always a good session.”
After a three-year sabbatical, Reeve is unbeaten since his boxing return last September and has his eyes on major titles in 2019.
“I think it is so far so good and everything has gone right so far.
“All I can really do is put 100% in all of my training and hopefully I will get the right opportunities when they come up.
“I want to be fighting for at least an English Title and above and I think that I am at that level to fight for these titles.
“Now I just need to wait for them to come up.”
The main event at the Town Hall will see local favourite James Beech Jr, of Bloxwich, contest the vacant Midlands super featherweight title with Tamworth’s Louis Fielding.
Tickets, priced at £35 standard or £60 VIP ringside with a buffet and waitress service, are on sale from the Town Hall Box Office on 0845 111 2900. It will be £40 for entry on the door.
The Grosvenor Casino Walsall, on Bentley Mill Way, are the show’s headline sponsors. They will host the weigh in (over 18s).
Image (c) Phil Sharkey