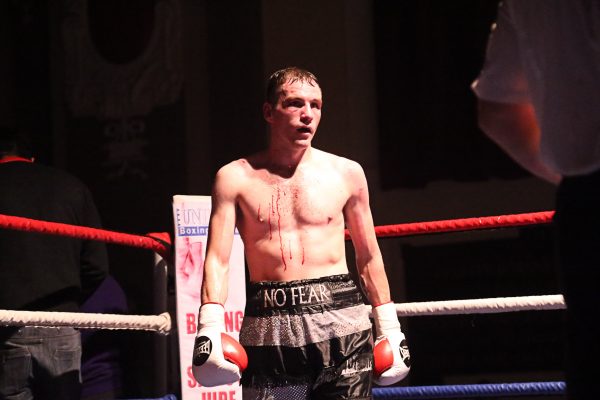 The Slasher Is Back!

Lee Glover is determined to make the most of his self-confessed ‘last chance in boxing’ as he prepares for a return to the ring.

Not since March 2016 has ‘the Tipton Slasher’ been seen in the pro code, but that is set to change at Walsall Town Hall on Saturday December 8. The Show is sponsored by Grosvenor Casino Walsall.

He features on Errol Johnson’s BCB Promotions next show at the venue, which is fast becoming the home of Black Country boxing.

Glover will be keen to make up for lost time, eight years from when he made his pro debut against Elemir Rafael at Wolverhampton Civic Hall.

That second round stoppage was contested at super bantam, where he’s intending to campaign after shedding the pounds.

A four-rounder at super feather will get him back in the swing of things, before he attempts to succeed on a stage where he’s previously failed.

The 31-year-old has garnered eight wins and three TKOs, but also suffered four defeats. Three of those were in title situations, the other televised.

A Prizefighter loss, inside two rounds, to the powerful Choi Tseveenpurev took his ‘0’ before he’d challenged for bona-fide honours.

He was edged out by Jon Keys for the English super featherweight title by the slenderest of margins, on a majority decision. There were two points in it or less. One judge had it a draw.

Andy Townend shattered his dreams of making it second time lucky with the same belt on the line, taking Glover out in round seven of a fight that had gone back and forth.

A losing effort by TKO in the second to old amateur foe Leigh Wood, for the Midlands featherweight crown, was his last time competing before a spell on the sidelines.

He said: “I haven’t boxed in two-and-a-half years and I’ve lost two-and-a-half stone since I decided to come back. I’m living the life, now as much as ever.

“I’m running every morning, training twice a day and eating right. I can see the difference. I’m not missing sessions, like I have done in the past.

“I’m looking to get down to super bantam, I think I’ll be a force to be reckoned with at that weight. I’ve done it before and I’m sure I’ll do it again.

“I actually made my debut at super bantam – and I stopped the lad. If I can get down and still feel strong, I’ll stay there. If not, I’ll go up to feather.

“I’m a big lad at super bantam and I think I can still mix at the top level. I sparred with Scott Quigg, when he was a world champion, and held my own.

“I know this is my last chance and I’ve set my heart on having three or four more years at boxing, winning titles and having a career to be proud of.

“I’ve beat myself, when I’ve had opportunities in the past, by not putting the work in. I’ve always had the skills, but sometimes not the dedication.

“I shouldn’t have really gone into Prizefighter, I was a pro novice and I jumped into it too early. I got the hardest draw possible and it didn’t go well.

“I thought I’d won against Kays, I felt like I was robbed. Townend just caught me with a good body shot. I didn’t have the muscle to absorb the shot, because I wasn’t in shape.

“I was barely in the gym, at all, for the Wood fight and it showed. I beat him comfortable, in the amateurs, so I know I can win if we ever meet again.

“All that is in the past now, I’m getting ready for my comeback on December 8 and I want to show everyone that I’ve got plenty left in the tank.”

Two six-rounders support the top of the bill, with major domestic challengers Ricky Summers and Tyler Denny returning to action.

Tipton’s Summers challenged for the British light heavyweight crown last year and was last ruled out of a clash with Olympian Joshua Buatsi through injury.

Denny, from Rowley Regis, has recovered from the horrific split lip and heavy swelling by his eye that put paid to his English title aspirations in September. ‘Ruthless’ still reigns supreme as the Midlands middleweight champion and is determined to bounce back from that eighth round retirement to Reece Cartwright.

Another man with a point to prove will be Craig Morris, from Ludlow in Shropshire, who is looking to rebound from his own September setback.

Morris last lost in a televised thriller at welter with Scott Fitzgerald, who pulled a 10th and final round stoppage out of the hat when he looked behind on points.

Luke Caci, from Newcastle-under-Lyme and a product of Orme Boxing Club, goes after a magnificent seven of pro boxing wins. The 28-year-old light heavy has six points wins so far.

Wolverhampton’s Conah Walker, a protege of boxing legend Ricky Hatton, targets a hat-trick of paid successes. The Merridale Boxing Club graduate only turned over on September 22.

The Grosvenor Casino Walsall, on Bentley Mill Way, are the show’s headline sponsors. They will host the weigh in and after-show party (over 18’s).