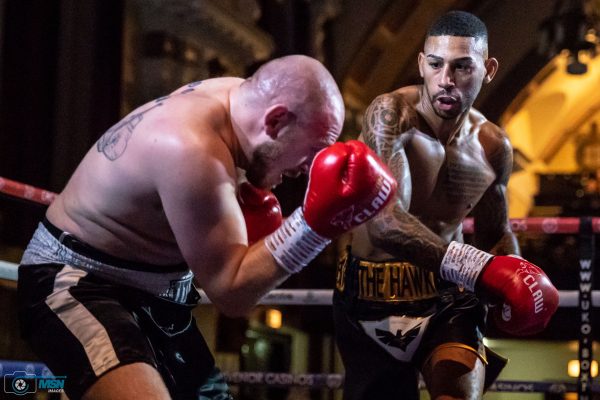 Troi Coleman is ready to ‘empty the tank’ upon his quick-fire return to action at the same venue where he made his pro debut.

‘The Hawk’ flies back into the ring at Walsall Town Hall just 35 days from his paid bow with a second outing in the middleweight division on Saturday October 27.

He features on Errol Johnson’s BCB Promotions show, a Halloween spooktacular titled ‘Things That Go Bump in the Night.’

He turned over with a 40-36 points whitewash over the experienced Lewis van Poetsch, who was competing in his 87th pro contest.

Van Poetsch made it 23 fights without being stopped by lasting the distance and needed his guile to see the final bell.

The chiseled Coleman looked in great shape having dropped pounds and has taken to the sport quickly, having hovered around light heavyweight in his former calling of kickboxing.

The 23-year-old competed at amateur level for the Platinum gym in his hometown of Burntwood, before becoming an unlicensed boxer.

He’s keen to go through the gears as he looks to become a success and is determined to see that his next opponent will be dispatched in clinical fashion.

He said: “I got my wish, I’m already busy and I was back in the gym two days after my last fight. It would have been the next day, but I had a family meal to go to.

“Poochi was a live opponent, I’d put in some good rounds in sparring and I expected a tough test. He got a few digs in, but nothing to really trouble me.

“I’m usually my own worst critic, but it was a decent debut. I boxed clever, I knew I probably wasn’t going to get Poochi out of there, so I didn’t try.

“I didn’t get involved in a scrap, I kept my fitness up and I still felt I had a lot left in the tank at the end. I think I’ve got a good base to work from.

“I’ve got the natural movement for boxing, no one has showed me where to put my feet and I’m sure I’ll only get better with more coaching.

“I’m tweaking my skills, all of the time, and looking to be more clinical with my punches and throw more combinations. I could improve a lot.

“With more experience, I’ll be able to see how far I’ve come. When I really start to perform, I want the results that make people take notice.

“I talked about having a lot left in the tank and, this time, I want to empty the tank and go for the stoppage. That’s the target for me.

“It’s the same ring, same venue and it’ll be the same outcome, if I perform as I can, with the difference hopefully being that I can get a TKO.

“I loved being in there, the atmosphere alone had me buzzing and I want a lot more of the same. Come October 27, I’ll get my fix of that again.”

Coleman watched the vacant English title be contested at his weight hours after his previous action, as Tyler Denny and Reece Cartwright clashed for the crown in the main event.

The doctor pulled Denny out in round eight after he suffered a gruesome split lip and heavy swelling by his eye, handing Cartwright the victory.

Coleman said: “I’ve got nothing but respect for the both of them, but for Tyler to want to go on with the injuries he had shows the sort of man that he is.

“I sparred with him, it was only once for a few rounds but you could see why he’s the Midlands champion. He’s lost, but he’ll get another break.

“Reece looked quality, he was a worthy winner and, at 6ft 3in, he made it a nightmare for Tyler to work on the inside. It was such a big match.

“I enjoyed watching the fight and I know that, in the future, to get to that level is not beyond me. I’m young and I’ve got time to develop.”

English Bantamweight Champion, Kyle Williams, from Wolverhampton, returns elsewhere on the card for the first time since claiming the national strap on June 9.

The Grosvenor Casino Walsall, on Bentley Mill Way, are the show’s headline sponsors. They will host the weigh in and after-show party (over 18s).