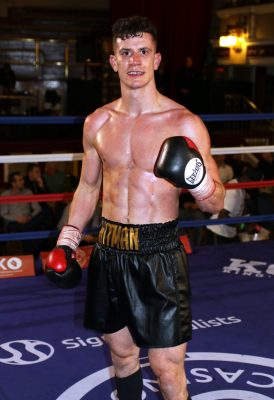 Nathan Heaney reckons he’s building a path towards the title distance when he steps up to six rounds for the first time later this month.

Heaney is scheduled to advance past four-rounders with another home bout at Kings Hall in Stoke-on-Trent on Saturday October 20.

He features on Errol Johnson’s BCB Promotions show, which has been titled ‘Pride of the Potteries.’

The 29-year-old, who is Stoke born and bred, is finding his way in the middleweight ranks and wants to make it a five-star show as a pro, after recording four paid wins with one TKO.

It comes after a lengthy amateur career with South Staffs Boxing Club, where he took part in 90 bouts before deciding to punch for pay.

‘The Hitman’ is now determined to knock his next opponent for six at Kings Hall, where he’s recorded two of his pro victories so far.

He may find Cristian Hoskin-Gomez a tough nut to crack, with the Devon-based Spaniard holding seven victories and three TKOs on his ledger.

Hoskin Gomez, at the age of just 23, is closing in on his half century of pro bouts and is a former British Challenge middleweight champion.

The eight-round Challenge strap is of interest to Heaney, who wants to work towards the Midlands crown held by Tyler Denny. Denny has taken to social media and voiced his intention to defend the area honours, after coming up short to Reece Cartwright for the vacant English title last month.

The 10-round duration seems a way off for Heaney, who is content to bide his time and get himself ready for opportunities to come along.

“I’m doing six rounds for the first time and people take note every time I mention it’s against Hoskin Gomez,” he told bcb-promotions.com. “His record doesn’t show how good he actually is.

“I’ll be expected to win, but anyone that expects it to be easy don’t know Hoskin Gomez. He’ll try to beat me and knock me out if he can. I’ve been training hard and doing split spars for six rounds, where a fresh man comes in after the third. It really keeps you on your toes.

“I need to get the distance under my belt and then I want to be stepping up towards titles, whether it’s a Challenge title or even the Midlands.

“To go from six rounds to 10 straight away might be a bit too much of a jump, so a Challenge belt over eight might be good. Tyler is a good lad and I rate him highly, but I’m up for fighting anyone to get to that title. Let’s just see what happens in the future.

“I think there’s a lot more to come from me and this is the start of me stepping up. I want to get the victory in the best fashion possible. King’s Hall is my home venue and I’ve got the loudest supporters in Stoke. You can hear them from all over when they sing Delilah. Bringing people through the door will get me opportunities down the time and I’ll be giving 100 per cent to get them cheering on October 20.”

Another home favourite occupies the home corner elsewhere on the card, as Stoke debutant Cole Johnson laces up the gloves.

Someone’s ‘0’ must go in the main event at Kings Hall, when Macclesfield’s Jake Haigh and Dudley’s Josh Miller clash in an eight-round super middleweight affair.

Wolverhampton’s Conah Walker, a protege of Ricky Hatton, will be back in action just 35 days from his paid bow with a second outing as a pro. He scored a TKO on his debut.