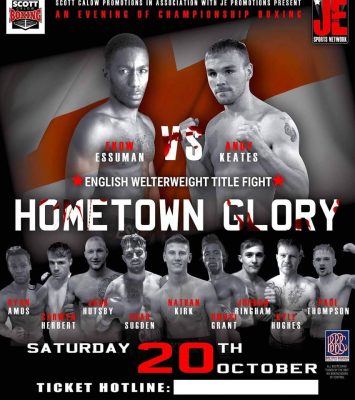 Andy Keates is confident his championship experience will give him the edge over Ekow Essuman when the pair collide for the English Title next month.

Leek’s Keates (13-7-1) travels to Essuman’s (8-0) hometown of Nottingham to challenge for the English strap on Saturday, 20th October at the Harvey Hadden Sports Centre.

This will be Keates’ fourth attempt at National Honours – but his first at welterweight – after failed attempts against Kevin Hooper, Ohara Davis and Joe Hughes.

However, the two-time Midlands Area Champion is confident of victory over Essuman, who has eight wins under his belt since turning professional on the back of a stellar amateur career which saw him box for Team GB.

“Ekow is a very good boxer,” Keates conceded, “He’s boxed at a high level as an amateur and is undefeated as a professional. I respect him but I do not fear him.

“I have fought for the English Title three times before and whilst I wouldn’t say Ekow is the weakest  opponent I have faced; I would say he is the least experienced at this stage.

“I’ve watched some of his fights but most of them are only four rounders so I don’t know what he has past that. Maybe he doesn’t either whereas I know what I’ve got in the tank. I’ve done the Championship Rounds.

“He is undefeated but I have taken a lot of ‘0’s’ from boxers and I’m getting quite a good reputation for beating boxers in their own back yard. Don’t get me wrong, I would love to have this fight in my home town but that’s boxing. I’m happy to go into Ekow’s backyard and take that belt back to Leek.”

Keates’ last outing was scored a no contest as he took on Craig Morris for the IBO Continental Title, which was stopped prematurely after Morris picked up a nasty cut. Since then, back in March, Keates has been in the gym preparing for his latest title tilt.

“It’s been a long hard camp,” he added. “Being at this level means fights are few and far between so camps can seem like an eternity but I’m in god shape.

“I’m not going throw names into the mix in terms of sparring but I’ve done some in Derby and I’m off to Liverpool next week. I’m feel really good.

“I’m expecting a long hard fight, I think Ekow will box rather than brawl but I’m happy to mix it and can take a punch. I’m confident of getting my hand raised.”

‘Hometown Glory’ takes place at the Harvey Hadden Lesiure Centre, Wigman Road, Nottingham on Saturday, 20th October. Tickets are £40 and can be purchased by calling Andy on 07817 644 429.