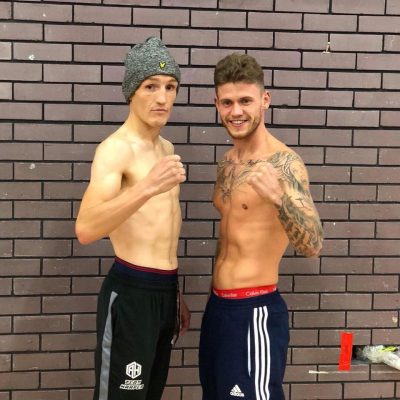 Harper Ready For Title Tilt
Tewkesbury’s own Adam Harper travels to Essex this evening to take on Billy Bird for the vacant BBBofC English Super Welterweight Title writes Ben Gibson.
The former Midlands Area Champion will be looking to bounce back from the defeat he suffered six months ago as he challenged Michael Zerafa in Australia for the Commonwealth Title.
Zerafa is a top class operator and Harper believes he has learned much from that first career defeat.
“I can take a lot of positives from that loss,” he told bcb-promotions.com. “I cannot afford to lose two on the bounce though and the loser of this will probably have to stay at Area Title level.
“I don’t want to be mixing at that level; I want to be mixing it at least at English and British Title level.
“I need to beat Billy Bird. I know he has come from the white collar scene but I am not taking too much from that.
“The reason for that is because Nick Blackwell has come from that way and look what he did? Then you look at BCB’s very own Lennox Clarke and there have been a few good white collar fighters and they have come onto the pro scene and they have done really well.
“He has won 18 out of 19 with only two stoppages, but I have spoken to a lot of boxers who have fought him and I know he carries more power than his record suggest.”
With Harper’s last fight taking him all the way to Australia, a trip to Brentwood holds no fear for the Hurricane.
“I came back to Birmingham to fight Ryan Kelly and he had hundreds of people cheering for him and it didn’t bother me,” he added.
“I flew to Australia alone and that didn’t bother me either and I was fighting in some else’s back garden, I got paid a fair bit of money and what not.
“I will go anywhere and I will fight anyone and I think I have proved that now.
“This will be my third fight away from home and I think all my opponents have a record of something like 48-3 combined from my last three fights.
“If you look at that I am not doing this the easy way and I could be doing it the small hall route and boxing journeymen but I want to fight good people.
“As then I can elevate myself as quickly as possible and that is what boxing is about to me.
“I can’t ask for a better team around me; my sponsors and everyone at BCB, with Errol Johnson, Dan Mole and Paul Mann, with Malcolm Melvin my coach. The title is coming home with me tonight.”
You can watch tonight’s fight live on IFL TV:
https://youtu.be/aYXD2JIK5Kg