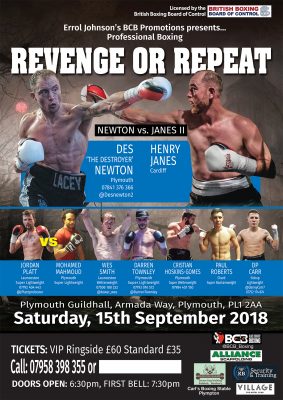 DP Carr is living the life of an athlete as he prepares for pro boxing action in a city where he has strong links next month.

Carr will travel from Sidcup in Kent to the Plymouth Guildhall for fight night on Saturday September 15 and his 10th paid contest.

A keep-busy affair for him features on BCB Promotions’ next offering at the Guildhall, on a show which has been titled ‘Revenge or Repeat.’

The 28-year-old is making waves in the super featherweight division and is under new management, after switching from Frank Warren to MTK Global.

Nine wins, with four TKOs are already in the bag as DP Carr, the moniker he uses under instruction from the British Boxing Board of Control, closes in on title shots.

Real name Danny Carr, he couldn’t be licenced as such with Dan Carr already a pro for five years previously. An alias of ‘Danny the Cannon’ was a suggestion rejected by the board.

It’s also DP the businessman, with food prep company the Athletes Kitchen and a restaurant in Dubai supplementing the boxing.

He spends plenty of time at the iBox gym in Bromley working with his coaches Eddie Lamb and Alan Smith, training alongside the likes of Lonsdale belt holder Bradley Skeete.

The second-generation fighter is the son of former pro Paul Carr, who featured on 14 occasions as a middleweight between 1995 and 1998.

DP explained: “I’ve created a working life for myself where I can still train quite a lot. For instance, I can get up to four weekdays off that I can spend in the gym.

“I’ve started the Athletes Kitchen, with MTK Global as my partners, and the business is doing well. As you’d imagine, it’s popular with boxers who are dieting.

“I can never really have an excuse for coming in overweight now! Nutrition is very important, as is good training and sparring.

“We’ve got some top class professionals and prospects in our gym, so fighting bigger and stronger men doesn’t faze me at all.

“I’m a big super feather and I hit hard, myself, so I’m not bothered about jumping in with welters and having a good go at them.

“Plymouth is a bit of a homecoming for me, I lived there for a few months when I was 18 and did a bit at Pilgrims Boxing Club.

“My dad and my step family stayed down there, so it will be good to see them and the friends that I’ve made from Plymouth.

“Most of them couldn’t really come to the London shows I’ve been on as it’s so far away, so this fight is for them.

“My bouts are usually on BoxNation, so it will be weird not having their cameras about. MTK still do about one show a month for them.

“Dad never really encouraged me to box, believe it or not, it was me who got into it when I was 15. We are a boxing family, though.

“My goal, as soon as I turned pro, was to win the Southern area title and see if I can move on to English and British level.

“It won’t be long before I’m ready to go for the Southern belt, perhaps even in the next two or three fights.

“I’m as strong, if not stronger, then most of the super featherweights in this country, so I’ll have that punchers chance against anyone.”

Launceston’s Jordan Platt takes on Plymouth’s own Mohamed Mahmoud, in might prove to be a super lightweight slugfest.

Darren Townley features looking for a ninth from 10 outings as a super lightweight paid performer. ‘The Terminator’ won an eight-rounder on February 9 at the Guildhall.

Watford-born Paul Roberts, now based in Chard, Somerset, completes the line-up for the home corner at lightweight.