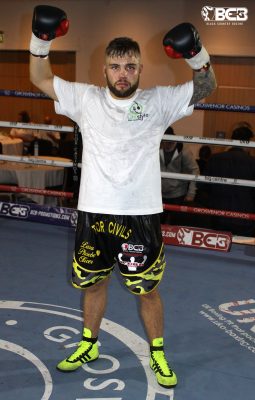 Road To Redemption For JC

Jordan Clayton feels ready to tread the road to redemption with a new voice in the corner for his ring return next month.

Clayton features as part of the Errol Johnson’s Black Country Boxing Promotions bill line-up for the Sunday afternoon of September 16.

The second city show is titled ‘Bilbao Bound,’ a nod to Brummie Gavin’s trip to Spain to challenge champion Kerman Lejarraga for the European welterweight title on November 17.

It’s crunch time at lunchtime for Clayton who is now trained by Tom Chaney – Gavin’s former coach – after spells under the tutelage of John Costello and Paul Webb.

‘JC’ has failed to win his last two pro outings, losing his undefeated streak in contest nine last out after a bloodbath with Danny Little.

Clayton was sliced below both eyebrows and fighting on instinct when referee Shaun Messer jumped in during round five to end proceedings, after he’d turned away from his opponent.

A six-round points draw had preceded that against Nathan Hardy, after Clayton sustained another nasty cut by his left eye early on in the contest.

The 24-year-old, from Solihull, wants to put those experiences behind him and believes he’s whipping himself into excellent shape, with a drop from super welter likely to be in his future.

He said: “I’m under Tom now and he’s the best trainer I’ve ever worked with. He’s got me working on my feet and using boxing skills a lot more, which is what I needed.

“I’ve needed to focus on keeping control of my temperament, which has let me down in the past. The red mist came down in my last fight.

“We all know what happened, I had cuts around both eyes and I was told that I needed to go out and stop my opponent. I was too reckless.

“I asked my coach to wipe the blood of my face and turned away from my opponent. The referee could have given me a warning, but he didn’t.

“I’m confident I won’t get cut again. The cuts have healed well, so there’s no reason to think otherwise. It was a bad night in December and it came as a big shock to me.

“It would have been easy to walk away from boxing, but I’ve stuck with it. I’m back, in a good place and enjoying it again, which is important.

“Camp has gone well so far and I haven’t been this light for a long time. If I can get back on track, we’ll be looking for titles but down at welter.

“I wasn’t happy before, in the gym or in the ring, and a happy fighter is a good fighter. I don’t feel like there’s any pressure on me anymore.

“I’ve got a lot of people to prove wrong and that’s fine, because I like it like that. I just want to look good on September 15 and make a statement.”

Gavin’s warm up for the EBU crown tops the bill on September 16, a five-fight dinner show with three other combatants occupying the home corner.

A pro debut will come the way of Gavin’s chosen one Bradley’ Bosh’ Thomas in the super lightweight division where ‘Funtime Frankie’ started his pro career.

Fellow Brummie Pearce, from Rednal, steps in for his second paid affair. The former white collar fighter turned over with a points success over Mohamed Mahmoud at welter in June.

Reigning Midlands heavyweight champion Kash Ali, another from Birmingham, completes the under-card after an impressive TKO win over Dave Howe to claim the crown in March.