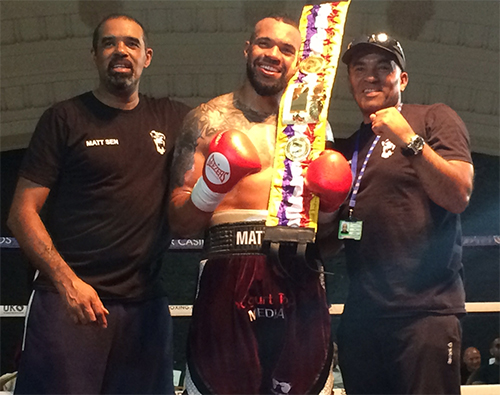 Matt Sen claimed the British Cruiserweight Title in only his fourth professional fight on Saturday evening.

The 30 year-old, who made his professional just debut 12 months ago, came back from the brink to defeat Wolverhampton’s Josh Burke in dramatic style on at The Venue, Dudley, on BCB Promotions’ ‘Usual Suspects’ show.

After a cagey opener, Burke found his rhythm. Working off a strong jab, the 32 year-old couldn’t miss with his right hand catching Sen with a number of well-timed shots. He continued to box with confidence in the third and there appeared to only be one winner.

However, that all changed in a split second. Midway through the fourth, Burke stalked Sen with his guard lowered. Sen hit back with peach of a right to the chops which dazed Burke and, after an onslaught of clubbing right hands, referee Kevin Parker waved off the contest. Sen had just enough energy to raise his hands in victory as he dug deep to claim the win, the belt, and maintain his unbeaten start to life as a professional boxer.

Finally, Daryl Pearce made a winning start to life in the paid ranks as he overcame Plymouth’s Mohamed Mahmoud 39—37.