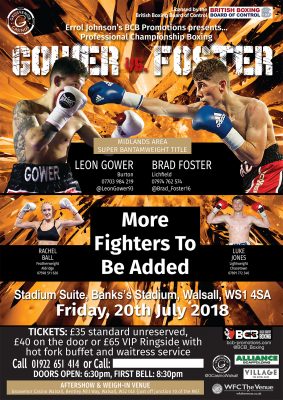 The pair, from Burton and Lichfield respectively, put their unbeaten records on the line as they go in search of Midlands glory at Walsall Football Club on Friday, 20th July.

25 year-old Gower is undefeated in his opening six fights as a pro having made his debut in 2015. Hard-hitting, Gower has three stoppages on his record to date.

Foster, five years Gower’s junior, is unbeaten in 9 outings with eight wins and one draw to his name. The Lichfield boxer turned over in 2015 and has two knock-outs to his name to date.

“It’s a mouth-watering clash” BCB’s Head of Boxing Errol Johnson told bcb-promotions.com. “They’re both confident enough to put their unbeaten records to the test and it’s a chance to pick up a BBBoC bona fide belt.”

Also on the bill, which is sponsored by Grosvenor Casino Walsall, is Walsall featherweight Rachel Ball and Chasetown lightweight, Luke Jones. More names will be added.

Tickets, priced at £35 standard unreserved and £65 VIP Ringside, to include a hot fork buffet, are on sale now from the Walsall FC Box Office 01922 651 414 or by contacting the boxer direct.

The weigh-in and aftershow party will take place at Grosvenor Casino Walsall, Bentley Mill Drive, Walsall (just off junction 10 of the M6).