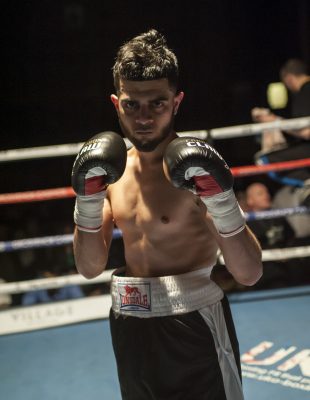 Lord Of The Flys

The pair clash at the Holiday Inn Birmingham on Sunday, 9th December on BCB Promotions’ ‘Lord of the Flys’ show.

Ahmed holds home advantage over Derby’s Blackshaw for the vacant 112lb area crown which has only ever been contested four times, in two contests that became rematches after one was ruled a draw.

Brummie Anthony Hanna was the first champion in 1994, outpointing Shaun Norman. The two also went the distance on the second occasion, a year later, which ended a stalemate.

No new title holder was produced when the strap was contested in 2015, as Jamie Williams and Usman Ahmed could not be parted. Williams won the return, on points, a year later.

Ahmed and Blackshaw will now duel for the vacant honours

“I’m 25 now and I’m in a position where I need to go and do something,” Ahmed told bcb-promotions.com. “It’s time to go up a level and a shot at the Midlands is exactly what’s required.

“I don’t know a lot about Conar, but I’m aware he’s a come forward fighter, who likes a scrap, and that’ll suit me. I’ll pick him off on the back foot.

“He’ll find the pace very tough if he bombs at me for a few rounds. It’s about controlled aggression, when I get my chance to shine I’ll take it.

“I’m determined to go out, beat the guy, pick up the belt and then go as high as I can in boxing. I’m not in the sport to stand still, I’ll want more.”

Four other contests will feature as part of the action at the Holiday Inn Queensway.

Central Area Heavyweight Champion Kash Ali, born in Birmingham but now living in Sheffield, features trying to keep up a run that has seen him score six TKOs from his last eight outings.

Jordan Clayton, who is now looking to campaign at welter, makes the short trip from Solihull having returned to winning ways at the same venue in September.

Super lightweight Brad Thomas, a protege of Frankie Gavin, drew on that September 16 card and will want to go one better this time.

Fellow Brummie Zaheer Asghar completes the line-up. The southpaw is looking to make it a hat-trick of victories in the super middleweight division.