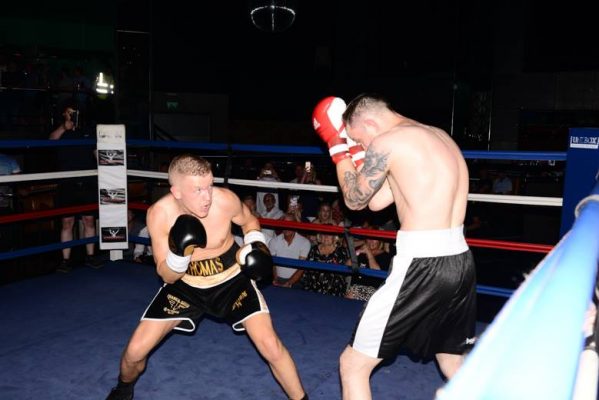 Bradley ‘Bosh’ Thomas has been taught the tricks of the trade ahead of a pro debut where he will support his mentor on Sunday.

Thomas has spent the last two years under the tutelage of Lonsdale belt holder and former world title challenger Frankie Gavin and now steps out of his shadow.

Gavin started his pro career in the super lightweight ranks where Thomas will make his bow at the Holiday Inn Queensway.

He features as part of the Errol Johnson’s BCB Promotions bill line-up for the Sunday afternoon of September 16, which is topped by second city hero Gavin.

The second city show is titled ‘Bilbao Bound,’ a nod to Gavin’s trip to Spain to challenge champion Kerman Lejarraga for the European welterweight title on November 17.

Fellow Brummie Thomas is raring to go and has spent most of his camp with ‘Funtime Frankie,’ who himself is boxing for the first time in over a year.

Thomas is turning over from the unlicensed scene but is learning his craft from a well-schooled operator, who was England’s first world amateur champion.

The two have been grafting at Gavin’s Ringside Gym in Acocks Green, where Thomas resides and is where the two first met.

The 25-year-old is now ready to become the first proper pro product from the unit, where Gavin is always around to offer guidance.

“I can’t wait,” Thomas told bcb-promotions.com. “I’m itching to get in there and I’ve put so much work into this. I’ve got my pro licence and I’ve been counting the days down since then.

“I’ve had some boxing experience from the unlicensed game and I first met Frankie when I came down to do some sparring at his gym.

“I ended up doing a couple of rounds with him, which was a massive learning experience, and he’s took me under his wing ever since.

“He’s been teaching me all of the tricks of the trade, but we are very different fighters. He’s slippery and slick, I’m more about pressure.

“My style is more to come forward and be aggressive, catch the shots from my opponent on the gloves and look to work on the inside.

“I pride myself on my work rate, I like to stay busy in there and I’ve got a big heart and a good chin. Those attributes are all that I really need.

“My favourite thing about boxing is seeing my opponent tire and take that big gulp of breath. From there, I know I’ve got him and that I’ll win.

“It seems a lot like a dream debut. It’s in Birmingham, which is incentive enough, and I’m supporting Frankie. He’s been like a brother to me.”

Gavin’s warm up for the EBU crown tops the bill on September 16, a four-fight dinner show with three other combatants occupying the home corner.

Jordan Clayton, from Solihull, returns for his first ring action of 2018 looking to bounce back from his only pro defeat. The 24-year-old may be dropping to welter for title opportunities.

Reigning Central Heavyweight Champion, Kash Ali, another from Birmingham, completes the under-card after an impressive TKO win over Dave Howe to claim the crown in March.