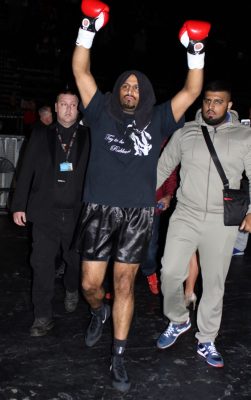 Bitter Sweet Year So Far For Ali
2018 has been bitter sweet for Kash Ali.
The Birmingham born bomber lifted the Central Area Heavyweight Title in March, out gunning David Howe at the Arena Birmingham.
Months later however, Ali was mourning the loss of his father. It’s been a tough time but the 26 year-old is back firing on all cylinders and ready to make a statement when he makes his ring return next weekend.
Ali supports Frankie Gavin’s return to home turf at the Holiday Inn Queensway in Birmingham on BCB Promotions’ show on Sunday, September 16.
The second city show is titled ‘Bilbao Bound,’ a nod to Brummie Gavin’s trip to Spain to challenge champion Kerman Lejarraga for the European welterweight title on November 17.
“I can’t wait to box in Birmingham again,” Ali confessed. “It was a great experience last time I boxed there and have lots of support there too.
“I beat David Howe for the belt and I had trained for ten rounds but managed to catch him in the second and it was all over.
“It was a great buzz to box at a big arena and I was supposed to box again a weeks after but the opponent pulled out and then I had time off with Ramadan.
I lost my father, who also did my corner, soon after and that was a really difficult time. He was there to see me get my belt which means a lot to me.
“The past few months have been very tough for me and I am just trying to hold things together. You have got to have faith. I want to put on a performance this afternoon, for my dad, and then look towards the British title next year.”
Gavin’s warm up for the EBU crown tops the bill on September 16, a five-fight lunch-time show.
There’s a pro debut for Gavin’s stablemate, Bradley’ Bosh’ Thomas in the super lightweight division where Frankie started his pro career.
Daryl Pearce, from Rednal, steps in for his second paid affair. The former white collar fighter turned over with a points success over Mohamed Mahmoud at welter in June whilst fellow Brummie Jordan Clayton makes a welcome ring return.
Tickets for ‘Bilbao Bound’ are on sale now, at £65 in the inner circle to include a two-course Sunday lunch or £35 standard. For more information and to buy, call 07900 741 617.
Relive Ali’s Central Area Heavyweight Title win here:
[embedyt] https://www.youtube.com/watch?v=PorOu1hqIxg[/embedyt]