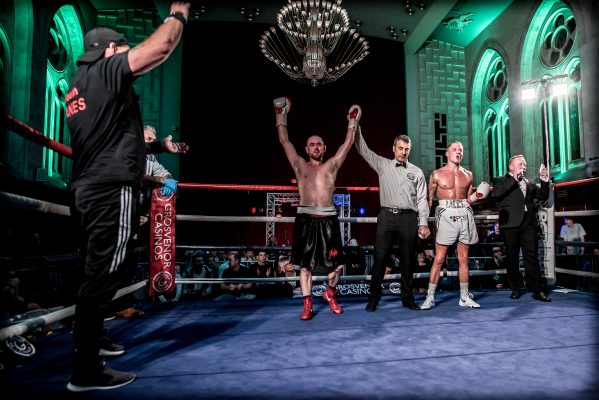 Janes Plans Repeat
Henry Janes has vowed to cut Des Newton down to size for a second time as the two prepare to do battle in an eagerly-anticipated rematch next month.
Janes uses the adage that a leopard cannot change its spots ahead of their return for the eight-round British Challenge title.
They will headline BCB Promotions’ next offering at the Plymouth Guildhall on Saturday September 15, on a show which has been titled ‘Revenge or Repeat.’
Revenge is what home favourite Newton, from Bere Alston in West Devon, has in mind. He’s determined to exact his revenge, after losing his ‘0’ to the Welshman on February 9.
Repeat is the target for Janes after he ran out a points winner at the Guildhall by two rounds, in a 78-76 call with referee Lee Emery.
The 35-year-old from Cardiff, who boxes regularly, has competed twice since then and nearly got his hands on the Celtic super lightweight title.
After beating Coventry’s former British title challenger Troy James on his own turf over-the-distance, Janes battled to a draw with Scot Craig MacIntyre in Glasgow.
One judge had it 96-95 to Janes, another for MacIntyre by the same scoreline, the third scoring it 95-95. They’ll battle again for the belt on November 30.
Newton will be looking to get his own back first and recorded an eighth win as a pro boxer, with two TKOs to his credit. All but one of those victories have come at the Guildhall.
The fight venue has proved a happy hunting ground for Janes, who ended the unbeaten streak of another Plymouth pugilist, Darren Townley, in his hometown.
Janes is employed by day as a tree surgeon and will start fight camp for the first of his double header next week.
He said: “I had some time off after my last fight, since then I’ve been ticking over in the gym and I’m always fairly fit through my work.
“This is almost like my warm up for the Celtic title, it’s good to get something like that under my belt before going for a big belt again.
“I’d never watched the Newton fight back until last week, he caught me with a couple of good shots early on but I only gave him a couple or three rounds, at most.
“I only had three weeks notice for him, now I’ve got enough time to prepare properly and I hear he’s been back in camp for weeks before me, so he might be over training himself.
“Experience won it for me the first time, I know the ring better than he does and I’m old school. It wasn’t difficult for me to win.
“I won’t box any differently – and I doubt he will either. He’s a strong boy who comes forward and throws lots of punches, that’s all he knows,
“His only chance, in my opinion, of beating me is if he’s able to knock me out. If it goes the distance, it’s my hand which will be raised again.”
There will be plenty of other local talent on show for the September 15 bill, with six bouts already confirmed for the under-card.
Jordan Platt, from Launceston in Cornwall, takes on Plymouth’s own Mohamed Mahmoud, in might prove to be a super lightweight slugfest.
Devon-based Spaniard Cristian Hoskin Gomez is approaching his half century of pro bouts and has previously won the British Challenge middleweight title at the Guildhall.
Townley features looking for a ninth from 10 outings as a super lightweight paid performer. ‘The Terminator’ won an eight-rounder on that February 9 event.
Launceston’s Wes Smith has three successes under the Guildhall lights to his credit, along with a draw away from home, in the super lightweight ranks.
DP Carr, from Sidcup in Kent, and Paul Roberts, of Chard in Somerset, will make the trip to Devon to occupy the home corner at lightweight and super bantam respectively.
Tickets are on sale now, priced at £35 or £60 ringside, and can be purchased by calling 07958 398 355. Doors open at 6.30pm on fight night, with the first bell expected for 7.30pm.