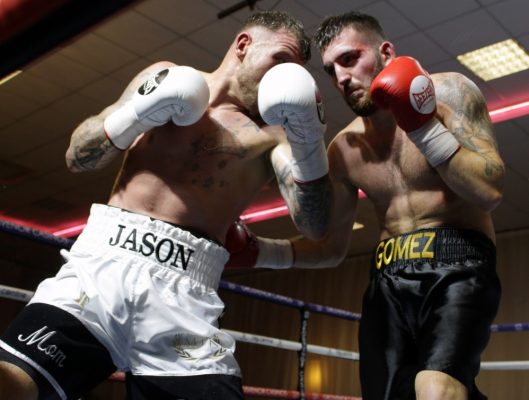 Cristian Hoskin Gomez insists he’d “fight for free” in Plymouth as he gets ready for another home fight at the Guildhall next month.

The busy Spaniard has already boxed on seven occasions over 2018 and will see action in the city he resides for a third time, writes Craig Birch.

He will feature on BCB Promotions’ next offering at the Plymouth Guildhall on Saturday September 15, on a show which has been titled ‘Revenge or Repeat.’

The 23-year-old was born to a Spanish mother and an English father and lived in Cadiz, before moving to Devon at the age of 10.

He’s approaching his half century of pro bouts after racking up 46 contests and travels all over the country to take on the top prospects.

The Guildhall holds happy memories for him after winning his first and only title, the eight-round British Challenge title, on those grounds.

Outpointing the unbeaten Tom Duff by two rounds, 78-76, in 2016 was a career highlight and he’s looking to make another statement on his own turf.

Hoskin Gomez may be perceived as holding ‘journeyman’ status himself, but he wants to go toe-to-toe with another road warrior at the Guildhall.

He said: “Some people struggle with journeyman, but I know I wouldn’t. I’m friends with most of them, but that always goes out of the window.

“If I can get one, I’ll be looking for an early stoppage. I’ve done it before and I can do it again. That would be a great result for me.

“I’ve enjoyed my career so far, I knew what I was getting into and I haven’t had the results I should’ve had. I want to carry on until I feel like I can’t do it anymore.

“I’ve been in some wars, so I want to try a box a little more because I knew I can do that. I’ll always try to do the best I can.

“I’ve not asked what I’m getting paid for fighting in Plymouth, as far as I’m concerned I’d fight for free. It’s a buzz to have that support when you get into the ring.

“I’ve had a bit of break, as I’ve done a lot already this year, and I’m ready to to again, Bring on September 15 and whatever the rest of 2018 has in store for me.”