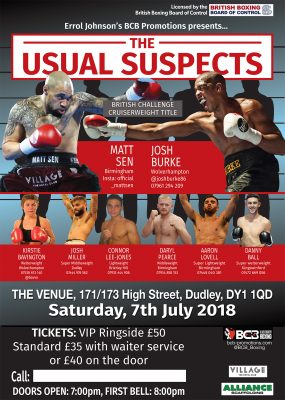 Matt Sen and Josh Burke will renew their rivalry in a Black Country battle for the eight-round British Challenge Cruiserweight Title.

Sen has been paired with Burke for a title fight which will take place at the Venue, Dudley, on Saturday, 7th July.

Unbeaten Sen will also put his ‘0’ on the line against Burke, who has unsuccessfully challenged for the title once. He was stopped in four rounds by Dilly Singh last year.

Burke, aged 32, has additionally been beaten by Russell Henshaw and Courtney Richards on points as a pro, but has beaten Lee Jones and Rolandas Cesna over-the-distance.

Sen – full name Matthew Sennett – is, like Burke, from Wolverhampton. He’s originally from Heath Town, but now lives in Oldbury

The 30-year-old has recorded three points wins since turning over against Dmitrij Kalinovskij, Henshaw and Kevin Williams.

Kingswinford’s Ball will be looking a record a sixth success from six outings, in the super welterweight division where older brother Jamie is a former Midlands champion.

Dudley’s Miller is back in action after a two year absence from light heavyweight activity. ‘The Jackal,’ 24, had impressed in points results over Iain Jackson and Mark Till.
Jones, also from Dudley, will be boxing again less than a month after his pro debut. The 22-year-old lightweight outpointed Liam Richards last Saturday night.

The Lions Boxing Club graduate impressed with a whitewash four-rounds points verdict and has pedigree, having represented England as an amateur.

Brummie Lovell, from Erdington, has built up a hat-trick of points wins over Kristian Laight, Richards and Dylan Draper as a super lightweight.

Wolverhampton’s Bavington is looking to bounce back after battling to a draw on her paid bow. The 25-year-old could not be parted from the experienced Borislava Goronova.

Pearce, from Rednal in Birmingham, will end over a year of frustration with his introduction to pro boxing at welterweight.

Tickets, priced at £35 or £50 ringside with waitress service, are available by calling 07976 283 157. Alternatively, contact any of the boxers in the home corner on Facebook or visit iboxingtickets.com.