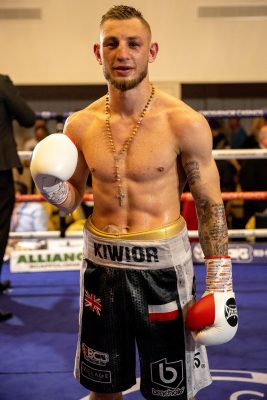 Damian Kiwior may only be a year into his boxing career but the 4-0 fighter feels invincible both in and out of the ring writes Ben Gibson.

The Polish born welterweight now resides in Wolverhampton and has had a busy year fighting three times in England and once in Poland.

Kiwior will be soon stepping into the ring again as he is fighting on the 9 December, just two months after his last fight.

“I feel really great,” he said. “The camp has worked solidly as I have had a lot of sparring with Jason Welborn and Frankie Gavin so it has been a big experience for me.”

With five fights in a year Damian’s camps have been short and he spoke about compensating this by saying, “I have been training a lot since the beginning of the year.

“I fight with high intensity so I didn’t want to take a break.

“After my last fight in Poland I rested for four to five days and then I went straight back to training in England.”

With the high intensity training that Kiwior is doing he must both learn and strive to be the best at the same time.

Due to this he puts 100% into all of his training sessions and focuses on his learning.

After his last fight Kiwior said, “I have spent a lot of time learning techniques with my trainers and I was focusing more on that.

“I feel that working on training has made me a better fighter.” The undefeated fighter has gone the distance in all of his fights and this has given him a great deal of confidence.

Kiwior feels invincible because of this and said, “It gives me confidence and I am invincible.

“It has giving me that confidence and also greater motivation for training.”

Being from Poland but Living in Birmingham is two very different lifestyles and Kiwior has boxed in both places.

However, he does not mind which country he boxes in, “Honestly, this sport is for me and it is not much difference.

“I know that my style of fighting is spectacular and I hope that more and more people will be able to watch me in the big shows.”

The last fight ended after the four rounds by a unanimous decision, and Damian is yet to stop a fight early, he spoke about his improvements for his newest fight saying, “The difference is large and I hope everyone will see how much progress I have made.

“I will show a better defence which I have corrected now.” With this being his first professional year, Kiwior spoke about the jump from the amateur game saying, There is a difference between the amateur and the professional boxing.

“But my experience has helped me and I am able to develop quickly.”