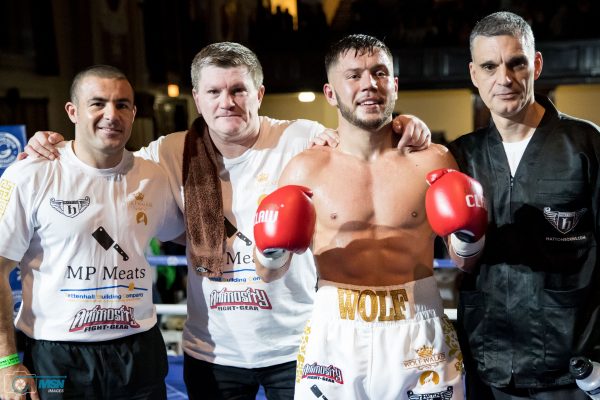 Conah Walker is hoping to make the most of a clear month in the gym with boxing legend Ricky Hatton and be firing on all cylinders come fight night.
The promising welterweight is gunning to make it a hat-trick of victories, since turning pro, with another ‘W’ at Walsall Town Hall on Saturday December 8.
He features on Errol Johnson’s BCB Promotions next show at the venue, which is fast becoming the home of Black Country boxing.
Walker made his paid bow at the venue in September, with former two-weight world champion Hatton in his corner, and made an impressive start.
He overwhelmed Czech opponent Jan Korec, with body shots his mentor would have been proud of, to score a TKO in the fourth and last round.
October brought with it a trip to Kings Hall in Stoke-on-Trent and another four-rounder against the rarely-stopped Rudolf Durica.
The Slovakian veteran used his experience to see the final bell for the 26th time out of 27 paid bouts, giving Walker something to think about.
The 23-year-old is a graduate of Merridale Boxing Club in his home city of Wolverhampton and left the amateur ranks with a record of 30 wins from 33 fights.
Glories in the vest included two national titles in the England Development Championships and a run to the national semi-finals of the England Elite competition.
November has been spent preparing for battle on December 8, where he’s planning to box with his head rather than his heart.
He said: “It works both ways, I was a bit gutted not to get the TKO but it was good to get the rounds in. I actually felt like I could have done a couple more.
“He was a tough cookie, but all he did was close down the space and tried to hold. I’d have liked to have been more prepared for that than I was.
“I could have stepped back and made more room for myself to work, I should have used my feet a bit more and looked to pick the power punches.
“You can be as big and hard as you like, take a shot flush on the chin and anybody goes down. Getting that right is all a part of the learning process.
“Ricky was pleased with my performance and told me I’d done everything right. He had plenty of opponents like that early on in his own career.
“I told my team I wanted to get another fight in before Christmas and they’ve come through for me, so I’m really looking forward to December 8.
“My people love the Town Hall, I sold nearly 200 tickets for my debut there and I took over 100 to Stoke. Hopefully, I’ll get good support again.
“I needed a clear month, with Ricky in the gym, to make some improvements from the last time and a clear November has allowed me to do that.
“I know I’ve got to be patient and work my way up the ladder. I believe I’m going to go a long way in the game and this is another step towards that.”
The main event at the Town Hall will see local favourite James Beech Jr, of Bloxwich, contest the vacant Midlands super featherweight title with Tamworth’s Louis Fielding.
Two six-rounders support the top of the bill, with major domestic challengers Ricky Summers and Tyler Denny returning to action.
Tipton’s Summers challenged for the British light heavyweight crown last year and was last ruled out of a clash with Olympian Joshua Buatsi through injury.
Denny, from Rowley Regis, has recovered from the horrific split lip and heavy swelling by his eye that put paid to his English title aspirations in September.
‘Ruthless’ still reigns supreme as the Midlands middleweight champion and is determined to bounce back from that eighth round retirement to Reece Cartwright.
Another man with a point to prove will be Craig Morris, from Ludlow in Shropshire, who is looking to rebound from his own September setback.
Morris last lost in a televised thriller at welter with Scott Fitzgerald, who pulled a 10th and final round stoppage out of the hat when he looked behind on points.
Lee Glover returns to the ring after two years out. ‘The Tipton Slasher’ has competed for Midlands and English honours, the latter at two weights. He’s back at super feather.
Luke Caci, from Newcastle-under-Lyme and a product of Orme Boxing Club, goes after a magnificent seven of pro boxing wins. The 28-year-old light heavy has six points wins so far.
Walsall’s Levi Ferguson and out-of-towners Nathan Reeve and Cole Johnson complete the card at super welterweight, bantam and lightweight respectively.
Tickets, priced at £35 standard or £60 VIP ringside with a buffet and waitress service, are on sale from the Town Hall Box Office on 0845 111 2900. It will be £40 for entry on the door.
The Grosvenor Casino Walsall, on Bentley Mill Way, are the show’s headline sponsors. They will host the weigh in (over 18s)