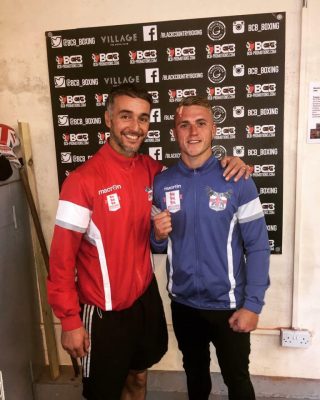 Boxing A Saviour For Johnson
While boxing is seen as a dangerous sport it can help people in their life, and it helped Cole Johnson tackle his anxiety when he was younger, writes Ben Gibson.
Now Johnson is a professional boxer and on the 8th December he will be stepping back into the ring for his second professional fight of his career.
At 24 Cole is new to the professional boxing scene and is hoping to build upon his undefeated record.
For his first fight Cole took on Simas Volosinas and it went the distance as he defeated the Lithuanian lightweight boxer on a points decision after the four rounds.
“I feel really good and everything is going well in my training camp for the 8th,” he said. “I start off with a 3 to 5-mile run at 5am before I go to work.
“I will then do three boxing sessions a week and two strength and conditioning training.
“In the gym I have been doing 15 rounds of sparring a week to prepare but I will be picking up the sparring a lot more for the last two weeks of training.”
“I have definitely taken the training up a notch, but I am always in the gym so it is like my second home.”
Having won his pro debut, it has definitely set his career on the right path, Johnson spoke highly about the win.
“It gave me a massive confident boost,” he added. “I felt comfortable in the ring and I was glad to shake off the ring rust off because I hadn’t boxed since May.
“I was glad to get the first one out of the way and now I want to get out as soon as possible again.”
“My style of boxing also suits the pros and I have been coming to BCB Promotions HQ for around 2 years so I already knew both Paul Mann and Errol Johnson.
“Training has stepped up a lot and so has the sparring but the main changes are settling down know and I am also picking my punches.
“The amateurs were about point scoring so coming in to the pros is a nice change as I can sit on my punches and make my opponent feel them.
“I have always loved since I was a kid but I only started boxing again when I was around 19.
“I was stuck in a bit of a rut in life and I was suffering with anxiety and it meant that I didn’t want to leave the house.
“Then I got asked to go back down to a boxing gym and it gave me an escape, from there it changed my life and I never looked back.
“Boxing has helped me massively.”
The main event at the Town Hall will see local favourite James Beech Jr, of Bloxwich, contest the vacant Midlands super featherweight title with Tamworth’s Louis Fielding.
Two six-rounders support the top of the bill, with major domestic challengers Ricky Summers and Tyler Denny returning to action.
Luke Caci, from Newcastle-under-Lyme and a product of Orme Boxing Club like Johnson, features alongside a host of undercard fighters.
Tickets, priced at £35 standard or £60 VIP ringside with a buffet and waitress service, are on sale from the Town Hall Box Office on 0845 111 2900. It will be £40 for entry on the door.
The Grosvenor Casino Walsall, on Bentley Mill Way, are the show’s headline sponsors. They will host the weigh in (over 18s).