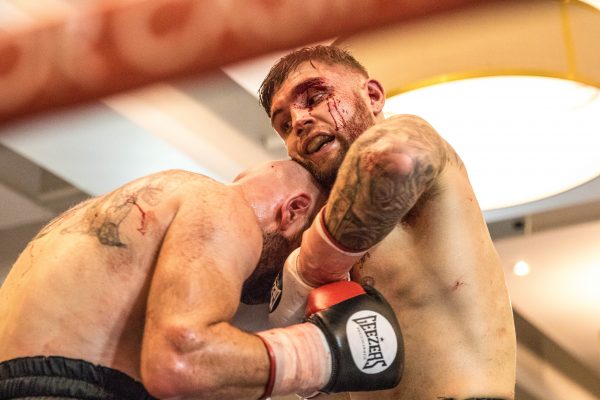 JC Back In Action
Jordan Clayton insists he’ll perform to his best even if he has to wear another crimson mask when he’s back in the ring next weekend.
Clayton has endured bloodshed in each of his last three contests, heading into battle at the Holiday Inn Queensway in Birmingham, on the Sunday afternoon of December 9.
He features on Errol Johnson’s BCB Promotions dinner show in the second city, on a bill which has been dubbed ‘Lord of the Flys.’
The vacant Midlands flyweight crown will be on the line in the main event, where Brummie Ijaz Ahmed tackles former English title challenger Conar Blackshaw, from Derby.
Clayton, from Solihull, boxes for the 11th time as a professional as he continues his progression down to welter, with new coach Tom Chaney in his corner for a second time.
The 25-year-old is looking to finish his year on a high note, with September’s points win over MJ Hall – forenames Matthew James – his only other action of 2018.
He was left with another nasty cut, this time in a previously unafflicted area, and still didn’t lose a round on his way to victory.
Things went downhill for Clayton in 2017, starting when he could only draw a six-rounder with Nathan Hardy. Being sliced open by his left eye in the second badly hampered him.
It was the first time he’d failed win as a pro in eight bouts, after seven points wins, and was to follow on December 22 of that year.
‘JC’ then lost his undefeated streak after a bloodbath with Danny Little, who was ruled the winner by TKO in round five of six.
He was cut below both eyebrows and was fighting on instinct when referee Shaun Messer jumped in to end proceedings, after he’d turned away from his opponent.
Clayton believes those setbacks have only made him stronger, though, and he’s vowed not to let anything get in the way of improving his paid ledger.
He said: “I’m just prone to cuts, but I’ve learned how to deal with them now. I stayed calm when I happened in my last fight, before that I’d have panicked.
“It happened in the third, some people thought it was an old wound opening up but it was above my left eye, on the other side of my eyebrow.
“It was an accident, I know Matt well and he’d have never done that on purpose. It was a clash of heads, we butted and these things happen.
“He was a good opponent for me, I’ve sparred him before but that’s a lot different to actually fighting. He’s a lot better than his record suggests.
“He made it awkward for me, you can end up tripping over each other’s feet against southpaws and he was tricky. I won and I was happy with it.
“I didn’t get the chance to show all of the things we’ve been working on in the gym, but my footwork was definitely better. I was a lot harder to hit.
“If I can get another ‘w’ on December 9, it should put me right back in the mix and I’m looking to put on more of a technical performance this time.
“It’s all about movement, if I can keep my distance with the jab and keep my head bobbing and weaving then no one can drop their head on me.
“I want another positive result and then I can enjoy my Christmas, which wasn’t the case last year. I felt bad vibes about boxing on December 21!
“I’ve got high hopes for 2019, but I know I’ve got to earn the right to get the chances I want, particularly coming down to be a welterweight again.
“This is a step towards that, I was 10st 13lb last time and I’m looking to come in at 10st 11lbs or 10st 10lbs for this one, so I’m gradually getting to 10st 7lbs.
“I think I’ll bring some strength, I’ve certainly felt more powerful when I’ve sparred with welters and there are some good fights for me there.”
Three other contests complete the line-up at the Holiday Inn Queensway, including a keep-busy affair for Central Area heavyweight champion Kash Ali.
The area boss, born in Birmingham but now living in Sheffield, features trying to keep up a run that has seen him score six TKOs from his last eight outings.
Super lightweight Brad Thomas, a protege of Frankie Gavin, drew at the same venue and will want to go one better this time.
Fellow Brummie Zaheer Asghar completes the line-up. The southpaw is looking to make it a hat-trick of victories in the super middleweight division.
Tickets for ‘Lord of the Flys’ are on sale, at £65 VIP ringside to include a two-course Sunday lunch or £35 standard. For more information and to buy, contact the boxers on Facebook.