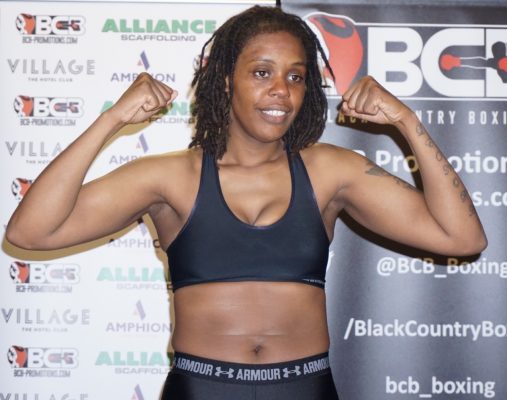 Lauren Johnson sees her future in the welterweight division as she closes in on a major title fight with another contest next month.
‘The Black Widow’ will be back in the ring, after nearly six months on the sidelines, when she’s a part of Friday’s fight night on Friday December 7.
She features on Errol Johnson’s BCB Promotions bill at the Goldmine Centre, on Lower Hall Lane. The show has been titled ‘Going for Gold at the Goldmine.’
The 34-year-old southpaw, from Willenhall, climbing the ranks and was scheduled to compete for the female Midlands welterweight crown in March, but withdrew through injury.
Newark’s Nina Bradley had been due to oppose her and later dropped down to super lightweight, capturing the Commonwealth strap.
Johnson is following a similar path but won’t be taking or Bradley, or remaining in the middleweight ranks where she won the eight-round British Challenge bauble last time out.
Another potential area title tussle against another Black Country girl, Wolverhampton’s Kirstie Bavington, hasn’t come off and might be for greater glories down the line.
Johnson has revealed she’s been informed she needs another couple of victories to be considered for Commonwealth honours at 147lbs, a weight she’s yet to make as a pro.
The former ABA national champion hasn’t had a belt strapped to her waist since winning the non-tournament England middleweight title as an amateur in March 2016.
She said: “I may have won a title at middleweight, but it’s not for me and neither is super welter. I’m a welter, through and through, and I’m here to stay.
“I was pleased to hear Nina won the Commonwealth, she’s a good girl, but the only way I could make her weight now is if I chopped my legs off!
“I’ve been put forward for the Commonwealth at my weight, it’s vacant and never been contested, but we’ve been told I need two more wins before I can be considered.
“I can make a start with that on December 7 and, hopefully, get another win as soon as I can in 2019, Then I’ll be ready for that big title fight.
“I think it’ll be a foreign opponent, as there isn’t really anyone for me to box at my weight in the UK. Kirstie is the one option I have.
“I’d love to box for the British title and Kirstie is as Black Country as I am, but I’ve got to think about my career and taking the right opportunities.”
Johnson’s last action was on June 9, at the Willows Banqueting Suite in Willenhall, where she made it 3-0 as a pro with a third paid points success.
She overcame a shaky start to defeat Hungarian Klaudia Vigh, winning six out of the eight rounds for a 78-74 result with referee Shaun Messer.
It’s her only bout of 2018, so far, with last year seeing her down Monika Atonik and Borislava Goranova. On her debut, Johnson beat Atonik so bad in one round it was scored 10-8.
She said: “I got the decision against Klaudia and I was never really in trouble, but my performance was very sloppy and I was hit with some stupid shots in the early rounds.
“I walked onto a few near the end of the first, with my hands down, and took two left hooks and a right hand one after the other. It was a bit daft.
“But it proved that I can take a punch if I have to and, over the contest, I thought I showed a lot of heart. There were positives and negatives.
“We’ve focussed on my foot-work, sinking in the body shots and switch hitting since then. I landed a couple of good right back hands in the fight.
“I’ve been told by my coaches that I don’t need to prove I’ve got heart and I can take a shot now, because people already know about that now.
“I’ve got an amateur pedigree that, if I’m honest, I’ve never really shown as a pro. I won major titles and, when the chance comes, I’ll do it again.”
Girl power is prevalent elsewhere on the card as Dani Hodges also features, with Ryan ‘Stewart’ Davies and Damian Kiwior in action and of the opposite sex.
Hodges, another former kickboxer, has downed two opponents on points since becoming a British Boxing Board of Control licence holder this year.
‘The Pocket Rocket,’ aged 32 and of Burntwood, is one of the few lady flyweights in the UK and is after a hat-trick of positive paid results.
Tividale’s Davies has bounced back from his first pro defeat with two positive points results and is looking to record his fourth victory of 2018 to complete his year.
He’s registered for the sweet science as ‘Stewart Davies’, using his middle name as his first name as there’s another Ryan Davies in the paid ranks. Another welter completes the card.
Poland-born Kiwior, who lives in Wolverhampton, has four points wins since turning over. He won a host of medals and was a national champion in his homeland as an amateur.
Tickets, priced at £35 standard or £65 VIP ringside with a buffet and waitress service, are on sale and can be purchased by calling 01922 651 951. It will be £40 for entry on the door.
The Grosvenor Casino Walsall, on Bentley Mill Way, are the show’s headline sponsors.