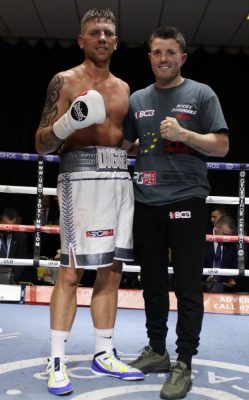 Summers Hoping To Put Frustrations Behind Him
Ricky Summers wants to put on a frustrating year behind him as he looks to end 2018 on a winning note with a comeback victory.
The former British title challenger hasn’t challenged for major honours over the last 12 rounds and has instead had to be content with two keep-busy contests.
The Tipton man features on Errol Johnson’s BCB Promotions next show on Saturday December 8 at Walsall Town Hall, which is fast becoming the home of Black Country boxing.
The 31-year-old light heavyweight was supposed to take on much-vaunted Olympian medallist Joshua Buatsi in July, on a Sky Sports televised stage at London’s 02 Arena.
An injury to the kidney put paid to that, what turned out to be a distressing health scare. It turned out not to be serious.
Summers had previously churned out comprehensively points victories over foreign opponents Gonzalo Romero and Tayer Mehmed since the turn of the year.
His prior outing saw him outpointed for the Lonsdale belt by Frank Buglioni, who has since lost the belt to Callum Johnson.
Summers, Buglioni and Hosea Burton are among the names chasing a second chance at the crown, but there is an alternative.
He was lined up for the English strap last year, which was then held by Liam Conroy. Miles Shinkwin and Joel McIntyre are due to contest the now vacant honours on December 1.
Summers will box seven days later, still feeling ambitious and with no regrets about not going toe-to-toe with Buatsi. Ultimately, he feels he had no alternative.
He said: “Boxing isn’t everything to me, I’ve got kids and a family to support so my health has to come first. There’s no way I could have physically fought Buatsi.
“I had a tumour in my kidney and it was a bit of a scare, at one point, but it turned out to be a bit of excess tissue that has now been treated.
“I was urinating blood, so there was no way I was getting in the ring a few weeks later with Buatsi. I was gutted to pull out, but I had no choice.
“I can’t really be blamed for that, but I’ve been out of the ring since April and maybe I’ve been forgotten about by Buatsi and the other top lads.
“They know where I am and I’m fit again. It’s been a frustrating year, so to be boxing again before the end of it is something to be positive about.
“I can’t wait to be back in the ring on December 8 and I’m determined to beat my opponent in good fashion, get the rust off and then keep busy.
“I want something big, the earlier the better in the new year, and I’ll take on anybody to do it. Some titles are up in the air, so let’s wait and see.
“Ultimately, I’d love another crack at the British, but that depends on Callum and he may vacate. I’m one of a few names who belong in that mix.
“I was mandatory for the English around about the time I took the fight with Buatsi, so that might be a decent stepping stone to get me on track.
“I’m ready to go, from here and going forward. I’m in the swing of things and I’ll be looking to remind a few people that I’m back on December 8.”
The main event at the Town Hall will see local favourite James Beech Jr, of Bloxwich, contest the vacant Midlands super featherweight title with Tamworth’s Louis Fielding.
Another six-rounder supports the top of the bill, with English title challenger and reigning Midlands champion Tyler Denny returning to action.
Denny, from Rowley Regis, has recovered from the horrific split lip and heavy swelling by his eye that put paid to his English title aspirations in September.
‘Ruthless’ still reigns supreme as his area’s title holder and is determined to bounce back from that eighth round retirement to Reece Cartwright.
Another man with a point to prove will be Craig Morris, from Ludlow in Shropshire, who is looking to rebound from his own September setback.
Morris last lost in a televised thriller at welter with Scott Fitzgerald, who pulled a 10th and final round stoppage out of the hat when he looked behind on points.
Lee Glover returns to the ring after two years out. ‘The Tipton Slasher’ has competed for Midlands and English honours, the latter at two weights. He’s back at super feather.
Luke Caci, from Newcastle-under-Lyme and a product of Orme Boxing Club, goes after a magnificent seven of pro boxing wins. The 28-year-old light heavy has six points wins so far.
Wolverhampton’s Conah Walker, a protege of boxing legend Ricky Hatton, targets a hat-trick of paid successes. The Merridale BC graduate only turned over on September 22.
Walsall’s Levi Ferguson and out-of-towners Nathan Reeve and Cole Johnson complete the card at super welterweight, bantam and lightweight respectively.
Tickets, priced at £35 standard or £60 VIP ringside with a buffet and waitress service, are on sale from the Town Hall Box Office on 0845 111 2900. It will be £40 for entry on the door.
The Grosvenor Casino Walsall, on Bentley Mill Way, are the show’s headline sponsors. They will host the weigh in (over 18s).