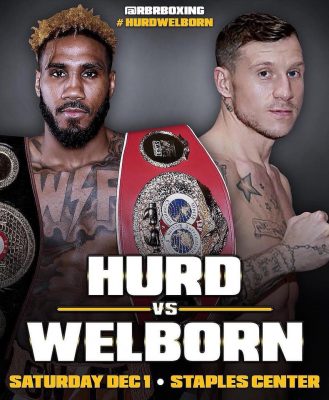 Jason Welborn will cap a remarkable 2018 by travelling to America to challenge undefeated Jarrett Hurd (22-0, 15KO’s) for the WBA ‘Super’ and IBF Super Welterweight Titles.

The 32 year-old (24-6, 7KO’s) will step back down in weight to challenge for the three belts after vacating the British Middleweight title that he won back in May and defended in September. On both occasions, Welborn faced local rival Tommy Langford, and on both occasions he was victorious in epic contests; the first of which won the BBBoC Fight of the Year.

The fight will take place at the Staples Center, LA, on the undercard of Deontay Wilder versus Tyson Fury on Saturday, 1st December.

Revitalised since his return to Errol Johnson’s BCB Promotions, Welborn is in the form of his life and is ready to pit his wits against the world’s best 154 lb fighter.

“Jarrett is a big talent,” Welborn told bcb-promotions.com. “He’s undefeated and holds three belts. He’s big at the weight and is very dangerous. I respect him.

“I know I’m the underdog but I was a 7/1 underdog to beat Tommy Langford back in May. I shocked Britain that night and I’m ready to shock the world in December. I’ve known about this fight for a few weeks and I was straight back in camp after beating Langford in December. This is my time.”

Maryland’s Hurd has recently undergone surgery to repair a torn rotator cuff suffered during his victory over WBA Super World Super Welterweight Champion, Erislandy Lara, in April. Ranked Number One in the World, it’s as tough a test Welborn could face but one that he, and his team, are relishing.

“We are delighted for Jason,” added BCB’s Head of Boxing, Errol Johnson. “He’s earned this opportunity and he’s earned it the hard way.

“He’s come up through the ranks and won the coveted British Title at the third attempt. It’s been a long, hard road but I’m delighted for him and the rest of the team. We are going there to win.

“I’d like to thank Tom Brown, Richard Poxon and all at Al Hayman for this opportunity.”