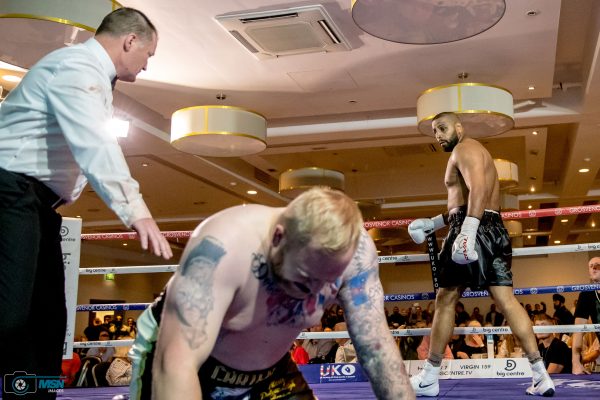 Kash Ali is feeling like a world beater who needs to ‘keep up the KOs’ as the influence of former global forces rubs off on him.

Ali has scored five stoppages in his last seven contests and is looking to improve the ratio at Walsall Town Hall tonight (Saturday October 27).

His highlight reel of 2018 so far has been topped by claiming Central area honours on the stage of the Genting Arena in February, halting Dave Howe in two rounds for the strap.

He was born in Birmingham, but now lives in Sheffield. It’s in the Steel City where he’s linked up with former WBC world super lightweight champion Junior Witter.

Ali has been put through his paces in the gym by Witter, following on from the work previously done with another one-time world boss in Tim Witherspoon.

‘Terrible Tim’ won the WBA crown in Ali’s division of heavyweight during the 1980’s and defeated Frank Bruno at Wembley Stadium to retain in 1986.

Witherspoon was on hand at the Genting in March to watch the crowning glory of Ali, who has warned his rivals he’s not done yet challenging for belts.

The 26-year-old reckons he’s come on leaps and bounds since boxing brains came into his life and he’s determined to carry on producing.

Six points victories followed his debut in 2011 and he has now reached 13 wins, with his eyes on major prizes heading into battle at the Town Hall.

He said: “It’s been going good, I’m trying to keep busy and I’ve had time out with injuries before. I feel like I’ve got momentum to keep up now.

“I’ve had some good knockouts in my past few fights and I’ll always be looking for that. To get the rounds in would be ideal but, when you’re on a roll, anything can happen.

“It’s sticking to my boxing skills that seems to be working, but the stoppages are still coming and that tells its own story.

“I’ve gone on a good run since I first started working with Tim, he’s back in the US now but he’s always at the end of the phone if I need advice.

“I’m training with Junior and he’s been great with me, too. He’s taught me how to make myself awkward to hit and that’s a massive advantage.

“They have both been mentors to me and we’ve all seen a massive improvement. It’s the little things they teach you, you can never learn enough from either of them.

“Winning the Midlands title has been the achievement of my career, so far, but I feel like I’ve got in me to challenge for bigger things.

“You look at the top 10 heavyweights in the UK and there’s the top boys and then the prospects. I’m definitely an up-and-coming fighter.

“I want to have the big nights and test myself and I’ve always dreamed of boxing for the British title. I could be 14-0, after this, so no one can claim I’m not ready for a step up.”

Reigning English bantamweight champion Kyle Williams, from Wolverhampton, returns elsewhere on the card for the first time since claiming the national strap in the summer.

Ryan ‘Stewart’ Davies, of Tividale in the Black Country, appears again under the Town Hall lights after recording a six-round points whitewash over Jamie Quinn on September 22.

Troi Coleman, a promising middleweight from Burntwood, completes the card after his winning debut on the same date. He, like Davies, is a former kickboxer.