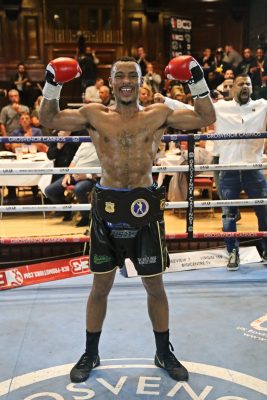 Denny In Search of National Honours

Tyler Denny is ready to build on his last Town Hall outing when he goes in search of National Honours this weekend (22nd September).

Now ‘Ruthless’ will get the chance to make his mark at national level with a shot at the English crown at the same venue, which has been relinquished by Elliott Matthews.

The 10-round contest, mandated by the British Boxing Board of Control, will headline Errol Johnson’s BCB Promotions show.

It might be now or never for Denny, who could build a path towards the British honours currently held by stablemate Jason Welborn.

“I’m excited,” he told bcb-promotions.com. “I’ve stayed in the gym since my fight last month (against van Poetsch) and I’ve watched my weight. The hard work starts here.

“Getting the right sparring is going to be very important for this one. Cartwright is 6ft 3in, so I need tall opponents. We’ve made inroads with that.

“I’ve been working with Ricky Summers (British title challenger) and Zach Parker (undefeated 16-0 prospect), who are both with BCB.

“I’ve also been trained alongside Frankie Gavin, who recentky joined the BCB stable too. It’s all great experience.

“It’s great to have the fight close to home, it wouldn’t have bothered me fighting away but it does make a difference to the atmosphere.

“It didn’t really feel like a home fight against Stokes, I wasn’t with BCB and he was and I went in there as a bit of an underdog. I proved people wrong and I hope to do that again.

“That was a good display from me and now I’ve got to take it to another level. I have that in me, the better the opponent the better I’ll perform.

“I’ve had a look at Cartwright and I’ve watched some of his fights on YouTube, including the one he lost. I’m not reading too much into that, he got buzzed and the referee jumped in.