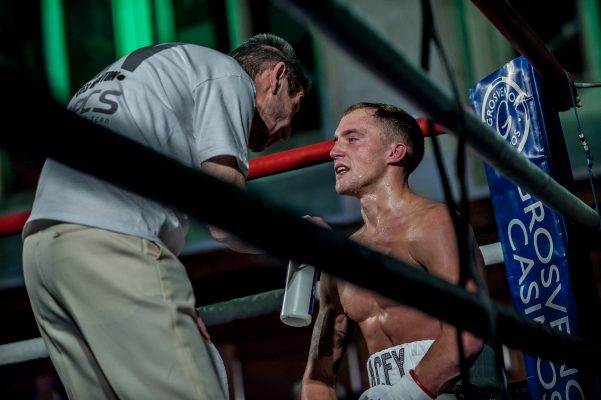 Des Newton will be looking to end the fight “emphatically” when he tries to vanquish Henry Janes at the second time of asking.

The match has been made for Newton and Janes to again contest the eight-round British Challenge title in a hotly-anticipated return.

They will headline BCB Promotions’ next offering at the Plymouth Guildhall on Saturday September 15, on a show which has been titled ‘Revenge or Repeat.’

Revenge is what home favourite Newton, from Bere Alston in West Devon, has in mind. He’s determined to exact his revenge after losing his ‘0’ to the Welshman on February 9.

Repeat is the target for Janes after he ran out a points winner at the Guildhall by two rounds, in a 78-76 call with referee Lee Emery.

The 35-year-old from Cardiff, who boxes regularly, has competed twice since then and nearly got his hands on the Celtic super lightweight title.

After beating Coventry’s former British title challenger Troy James on his own turf over-the-distance, Janes battled to a draw with Scot Craig MacIntyre in Glasgow.

One judge had it 96-95 to Janes, another for MacIntyre by the same scoreline, the third scoring it 95-95. They’ll battle again for the belt on November 30.

Newton will be looking to get his own back first and recorded an eighth win as a pro boxer, with two TKOs to his credit. All but one of those victories have come at the Guildhall.

‘The DEStroyer,’ who has turned 30 since the Janes fight, insists he’ll bounce back in style and has vowed to take the referee’s scorecard out of the equation this time.

The boxing builder, who is co-owner of a cladding company, has the bit between his teeth and will go out all guns blazing.

He said: “I need to rectify this loss and make sure I’m the last man standing because, I can assure you, that’s what it’s going to come down to.

“The main difference between this and the first fight is I know I can hurt him and he knows he can’t hurt me. He’s got absolutely no power, I think I’ve had my wife hit me harder!

“When we last went in there, I caught him with a right hand in the first round and shook him to his boots. Maybe I got a bit complacent after that, by looking for the same shot.

“He’s a tricky customer, I’ll give him that, but all he can do is try and outbox me on the back foot, like before. I’ve got to make a statement, so there will be far more pressure from me.

“I want to end the fight emphatically and, even after losing to him, I don’t see Janes as much of a challenge. I’ve only myself to blame for being in this position.

“I have to admit I went to Jamaica on holiday for two weeks, from Boxing Day of last year, with every intention of training hard over there. I tried, but it wasn’t the same.

“But it wasn’t like he knocked me out. If I’d been on the floor, out cold, I’d have been devastated. He’s not capable of doing that to me.

“I know I’m a better opponent than he faced that night, more potent and up there with him for being aloof. I’m not going to let him mug me again.”

Darren Townley resides in Plymouth and has eight wins from 10 outings as a super lightweight paid fighter. ‘The Terminator’ won an eight-rounder on that February 9 event.

Launceston’s Wes Smith has three successes under the Guildhall lights to his credit, along with a draw away from home, in the super lightweight ranks.