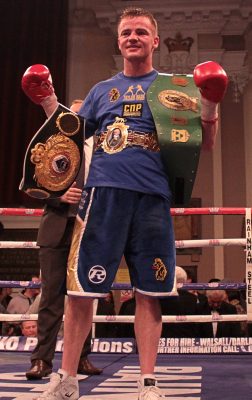 Frankie Gavin warms up for his European Welterweight Title fight later this year with a six round contest in his home city.

The 32 year-old takes on Kerman Lejarraga in the Spaniard’s back yard of Bilbao on 17th November. As Gavin, the former Commonwealth and British Champion, steps up camp, he will take part in a warm-up bout at the Holiday Inn, Smallbrook Queensway.

“Camp is well under way and I’m determined,” Gavin told bcb-promotions.com. “Lejarraga is my main focus but it’s important to get back in the ring, blow off a few cobwebs and make a statement.

“November will soon come round and I’m going to Bilbao to bring the European Title home.”

The show, ‘Bilbao Bound’, takes place on Sunday, 16th September. Tickets are £65 to include a two-course Sunday lunch or £35 standard unreserved. Tickets can be purchased by calling 07900 741 617